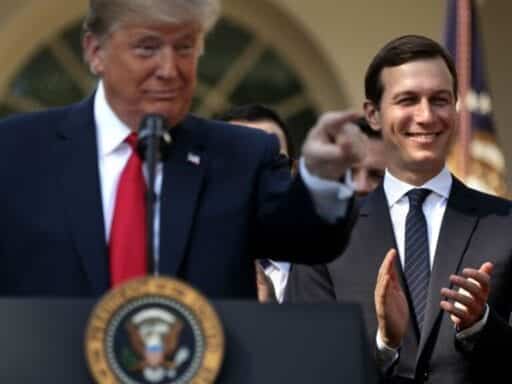 The tax code is designed to benefit rich people more.

Jared Kushner, President Donald Trump’s son-in-law, probably paid little to nothing in federal income taxes for multiple years, even as his net worth soared, according to a new report. And it was all likely completely legal.

Jesse Drucker and Emily Flitter at the New York Times reported on Saturday that Kushner, who is married to the president’s daughter, Ivanka Trump, and is one of his senior advisers, appears to have paid almost nothing in federal income taxes from 2009 to 2016. The Times reviewed documentation on Kushner’s business dealings, earnings, expenses, and borrowing and found that Kushner used a common tactic in real estate accounting that allows developers to significantly lower their tax bill.

The trick, depreciation, is meant to protect real estate investors from losing money as their buildings age. But in practice, it allows them to create losses for themselves on paper — even as many properties become more valuable over the years, not less. The Times provided one example from 2015 in which Kushner’s salary was $1.7 million but he declared $8.3 million in losses because of his company’s real estate depreciation.

Kushner Companies, like many real estate firms, passes on any tax obligations to its owners, including Mr. Kushner and his father, who incorporate them into their personal tax returns.

Unlike typical wage earners, the owners of such companies can report losses for tax purposes. When a firm like Kushner Companies reports expenses in excess of its income, the result is a “net operating loss.” That loss can wipe out any taxes that the company’s owner otherwise would owe. Depending on the size of the loss, it can even be used to get refunds for taxes paid in prior years or eliminate tax bills in future years.

Kushner also declared losses on properties he got with borrowed money, not his own funds. In other words, he was able to reduce his tax bill using other people’s money. Kushner’s father, Charles Kushner, also likely avoided federal income taxes from 2012 to 2016.

The tax code is good to rich people

A spokesman for Kushner’s lawyer told the Times that the documents provide an incomplete picture and said that Kushner “properly filed and paid all taxes due under the law and regulations” at the advice of “numerous attorneys and accountants.” And as the publication notes, there’s no evidence that Kushner or his company did anything illegal.

Still, the story highlights an important feature of the United States tax code: It’s quite easy for rich people to take advantage of it — before and after the passage of the Republican tax bill in December of last year. That legislation, which cuts taxes for most Americans but disproportionately benefits rich people and corporations, expanded the benefits real estate investors get and let them take even bigger deductions.

Kushner isn’t the only real estate investor in the executive branch likely taking advantage of tax loopholes — there’s also the president himself. Trump has refused to release his tax returns, a norm for most presidents, and on the campaign trail in 2016 openly acknowledged that he avoided paying taxes for years. During the campaign, the Times had obtained Trump’s 1995 income tax returns and found he declared a $916 million loss that year that would have allowed him to avoid federal income taxes for years.

The Kushner story also comes on the heels of another blockbuster Times investigative report about Trump’s tax practices and those of his deceased father, Fred Trump. Reporters uncovered a pattern of tax evasion and business practices that allowed Trump to receive millions of dollars from his father. On that front, what was and was not legal is unclear.

The line between tax avoidance and tax evasion is a blurry one, and wealthy people use a variety of tricks to lower their taxes all the time. That’s part of why reports about Kushner’s and Trump’s taxes are important — they exemplify a broader systemic setup that exacerbates wealth inequality in the US. And the GOP tax bill didn’t fix the problem, it made it worse.

Larry Kudlow, Trump’s top economic adviser, brushed aside the questions the Times reports raise in an interview with George Stephanopoulos on ABC’s This Week on Sunday.

“I mean, he’s a successful businessman, there’s no law against that, I respect that. I think Americans respect success,” Kudlow said. “I just don’t think these stories have anything to them.”

Trump’s sister calls him a liar with “no principles” in secret recordings
Why visual effects artists love this shiny ball
President Trump’s checks repaying Michael Cohen for hush money, explained
Big events are back
What are the symptoms of the new coronavirus?
The life and death consequences of naming the coronavirus