John Bolton’s complete reversal on Russia, in one tweet 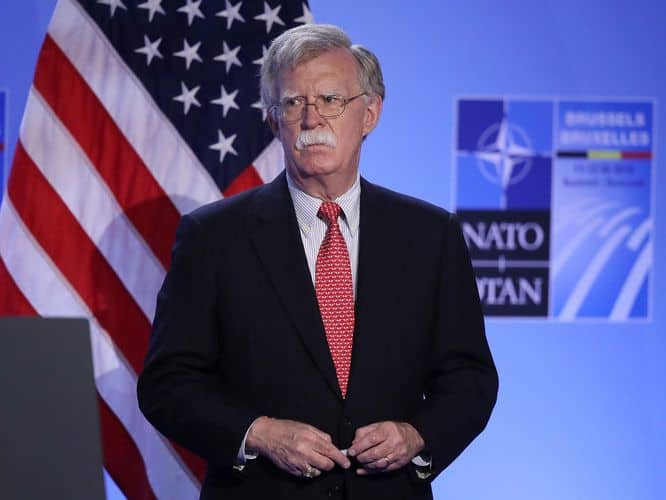 Bolton before Trump: Russia’s election interference is “an act of war.” Bolton with Trump: Mueller’s Russia probe is a “witch hunt.”

The evidence comes from a statement he made on Wednesday announcing Trump’s desire to postpone a meeting planned for the fall with Russian President Vladimir Putin. “The president believes that the next bilateral meeting with President Putin should take place after the Russia witch hunt is over,” Bolton said, “so we’ve agreed that it will be after the first of the year.”

The key words there, in case you missed it, are “witch hunt.”

At first glance, it may not seem surprising that a Trump staffer would use one of the president’s favorite insults to describe special counsel Robert Mueller’s investigation into possible collusion between the Trump campaign and Moscow to win the 2016 presidential election. (According to NBC News, Trump has tweeted the phrase 89 times as of Wednesday.)

But the New Yorker’s Susan Glasser summed up perfectly why Bolton’s statement was so stunning — and alarming.

Now as national security adviser he puts out an official statement calling investigation of said act of war “witch hunt.”

That’s truly amazing. Before Bolton joined Trump’s White House, he established himself as a foreign policy hawk in previous Republican administrations and conservative intellectual circles. And while most of his ire seems directed at Iran and North Korea — he’s advocated for war with each country at various times — he’s also spared no sympathy for Russia.

As Glasser mentions in her tweet, Bolton referred to Russia’s interference in the 2016 US election as “a true act of war, and one Washington will never tolerate” last July.

The Washington Post also pointed out that Bolton used to criticize someone Trump admires:

Bolton also has a long history of making comments about the Russian president personally, suggesting a number of times that Putin has lied about global events. In response to Russia’s handling of the situation involving National Security Agency leaker Edward Snowden in 2013, Bolton told Fox News that “we need to do things that cause [Putin] pain as well.”

It’s of course possible — more than likely, really — that Trump personally dictated the statement himself. If that’s the case, Bolton would be hard pressed to tell the president he wouldn’t use “witch hunt” in an official statement.

But it’s also not the first time Bolton did something he probably didn’t want to do. Bolton has advocated for striking North Korea over its nuclear program; North Korea, in return, has called him “human scum.” Yet during Trump’s historic summit with North Korean leader Kim Jong Un, Bolton found himself shaking hands with the dictator (see the photo on the left).

So after just over two months as Trump’s top national security aide, Bolton has had to act against his stated views on Russia (and North Korea). His latest statement is just another example of how time with the president has changed him.

Chief Justice Roberts could be an unexpected savior of public education in a religious schools case
Trump showed no regret over family separations during the presidential debate
Trump wants to get back to the Oval Office. He may still be contagious.
Report: Crazy Rich Asians sequels offered an Asian writer 1/8th of her white co-writer’s salary
Dianne Feinstein is the right’s new boogeywoman
Fandom’s new “ship dynamics” meme is all about our fave romantic tropes