Trump tweets sympathies to McCain’s family after his death 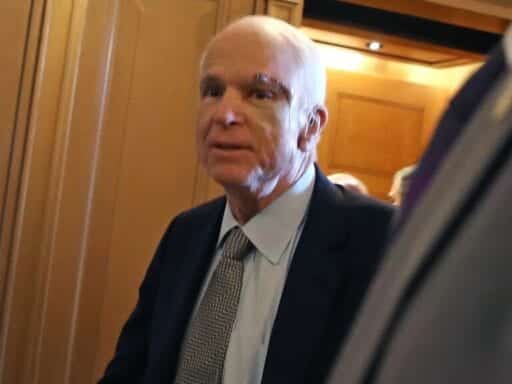 Trump disliked McCain, but his tweet right after news of his death is straightforward

President Trump took a moment to offer condolences to the family of former Republican presidential candidate Sen. John McCain of Arizona, who passed away on Saturday at the age of 81.

The president’s straightforward tweet may come as a surprise to some, since Trump famously criticized McCain, a former Republican presidential candidate and former Vietnam prisoner of war, during the 2016 presidential campaign.

“He’s not a war hero,” Trump said during a Family Leadership Summit in Ames, Iowa in July 2015. “He was a war hero because he was captured. I like people who weren’t captured.”

At the time, many thought this was the moment Trump’s presidential candidacy was finished. Who can so strongly criticize a beloved national figure and former party nominee and survive?

Trump doubled down in an op-ed for USA Today after his statement, saying flatly, “the reality is that John McCain the politician has made America less safe,” referring to his record of supporting foreign wars.

Trump and McCain had plenty of policy disagreements — largely but not exclusively on immigration and foreign policy — and McCain famously became the deciding vote to kill legislation designed to repeal Obamacare, one of Trump’s campaign promises. As the Washington Post’s Anne Gearan andJosh Dawsey reported, resentment from Trump lasted through the final days of McCain’s life. Trump has continued to tweet criticism of McCain even after he was diagnosed with terminal brain cancer months ago.

If anything, Trump has proved that it’s not a career finisher to criticize someone many considered to be an elder statesman. But for now, at least, he’s keeping the tweet classy.