Kansas City is making its bus system fare-free. Will other cities do the same? 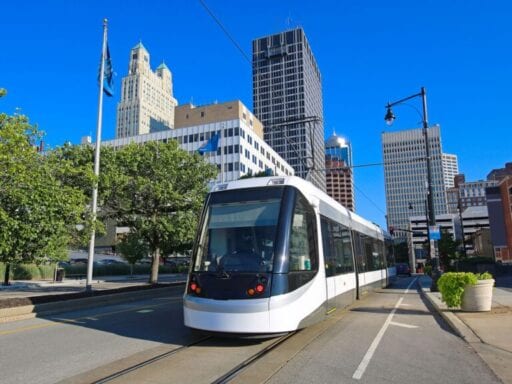 Smaller cities have experimented with free public transit, but it hasn’t been implemented yet on a larger scale.

During testimony in 1979 to Congress, John Simpson of the American Public Transit Association described buses as “the backbone of [America’s] transit systems.” Even then, when buses carried more than two-thirds of transit riders, Simpson hinted at a bleak future for public transportation, one driven by a lack of government investment.

America’s bus fleet is “in desperate straits,” he said, urging the government to double the amount of buses it purchased annually. “People assume our transit systems will offer an alternative to meet their travel needs but … without attention to our urgent bus needs, we cannot respond to rising demand,” he concluded.

Simpson wasn’t wrong. As US cities expanded, existing transit systems were deprioritized in favor of building roads and highways to make car commutes easier. Streetcar lines were ripped out and bus routes were cut as people grew more reliant on cars. Today, transit ridership is facing a nationwide decline due to a variety of factors, namely rising fares and service cuts on bus and subway systems.

“Without attention to our urgent bus needs, we cannot respond to rising demand.”

Despite this decline, Kansas City, Missouri, will be the first major US city to offer free bus service to residents by 2020, as it hopes to “build up a culture of bus riding,” according to Mayor Quinton Lucas. City Council members in Kansas City, a metropolis of about 490,000 people, voted unanimously in early December on a plan that will cost the city about $8 to $9 million annually — equal to the amount of fares previously collected from bus riders every year. The council still needs to decide how the system will be funded and where that money will come from in the budget.

So far, the proposal has been applauded, but some critics have questioned whether the push to increase transit use will work, citing low ridership numbers and the state of Kansas City’s transit infrastructure. (About 92 percent of people in the region use a car to get to work.) For the most part, the city has garnered praise from transit advocates and progressives for making its bus system more accessible, a move that could increase mobility and economic development.

Dig deeper, and you see why “abolishing fares” was possible there, but also will have fairly limited impact.

Kansas City has structural problems, that make transit an impossible choice. How can you run effective transit when all you have is suburbia?

While the program is still in its early days, some surmise that the national attention it received could prompt other cities to consider adopting a similar system. In recent years, lawmakers in cities like Salt Lake City and Denver have expressed support for a zero-fee bus system, but no measures to the extent of Kansas City’s have been passed. Transit advocates, activists, and residents from places like Portland, Seattle, and Nashville are asking: Can other cities work to subsidize their bus systems? If they have the budget for it, should they do so, and what can residents gain from it?

Cities have experimented with free buses before. Success depends on how many people use them.

The argument for free mass transit in the US (and the case against it) has existed for decades — as early as the 1970s when several US cities, including Denver and Austin, experimented with free public transit in an effort to reduce car congestion. These experiments increased ridership, but didn’t succeed in changing how frequently people traveled by car, nor did they significantly increase mobility for residents who were unable to transport themselves or pay for public transit.

Free transit sounds especially appealing and even democratic today, as the climate crisis grows more urgent. (Automobiles are responsible for the majority of carbon emissions in the transportation sector, which make up 29 percent of all US emissions.) Activists are positioning public transit as the panacea to reduce carbon output and car congestion, and systems can theoretically be more equitable and efficient without fares, since buses won’t have to stop as long to collect them.

More than three dozen communities in the US currently offer free transit in some capacity, according to a 2012 report published by the National Academy of Sciences. Most successful free systems are limited to buses and are typically found in resort areas (to shuttle large numbers of tourists), college towns, or communities with low ridership levels. Transit experiments have also broken ground in Europe, notably in small cities like Tallinn, Estonia, and Dunkirk, France, to provide free transport for locals.

Until now, no American locality of Kansas City’s size has implemented a universal no-fare system. The Kansas City Council already expects to spend about $8 to $9 million to cover for the lost fares, as mentioned, but the city already loses $1.5 million collecting fares every year, according to Mayor Lucas. “The shortfall is about $6 million, and we can find that in the budget,” Lucas told the Seattle Times.

Kansas City’s system is still relatively small, Ben Fried of Transit Center, a transportation research and authority group, told Vox: “It’s much different if you’re talking about bigger agencies, which carry hundreds of thousands of trips a day and receive anywhere from hundreds of millions to billions of dollars from annual fare revenue.”

While the city has a population of 490,000, it’s important to note that its bus system only services about 43,600 passengers on a weekday, according to Kansas City’s transit authority 2018 budget. Critics of the initiative point out that since very few residents use transit to commute to work (about 1.2 percent), it’s not likely that a free bus system will drastically change existing behavior.

That’s primarily why past free transit experiments in the US have been considered failures. They’ve taken place in metropolitan areas like Austin or Denver, contending against urban sprawl, which prompted residents to commute by car.

It’s also difficult to compare cases for free transit across different cities, Fried added. Even if a city goes fare-free, the extent to which this impacts residents’ commuting choices is uncertain: In Dunkirk, France, ridership increased by 85 percent immediately after the initiative was introduced, but in Tallinn, Estonia, it’s only increased by 3 percent over the five years that free transit has been offered.

However successful Kansas City’s free bus proposal will be, it’s a political step forward — one that could shape future transit policies in similar metropolitan areas.

“Over the last four to five years, there’s been a mindset change at the city, and that mindset change is focusing less on what the ridership and operations of transit mean and more on what the impact of that transportation is,” Bob Bennett, the city’s former chief innovation officer, told CityLab.

By deemphasizing its focus on ridership numbers, Kansas City is taking a risk on a less popular mode of transportation, in the hopes that it can improve bus usage overall.

The unique challenge of free transit

Major cities might reasonably hesitate to embrace a fare-free model because there tends to be a trade-off between price and service, Fried said. Most high-capacity transit systems around the world are generally reliant on fares to fully operate. It would be extremely costly for local governments to not only subsidize a system the size of New York City’s or Chicago’s, but also to anticipate and accommodate the surge of riders that follows it.

As Jarrett Walker wrote in his book Human Transit, an analysis of what makes transit systems successful: “Big-city systems are already crowded at least during the peak period and simply wouldn’t have the capacity to handle all the riders that free fares would attract.”

A zero-fare system could be financially feasible for a transit agency the size of Kansas City’s, which relies on fares for about 12 percent of its funding. Fried cited research done by Transit Center, which found that the top priority for most transit riders is how frequent and reliable a system is, not its price.

“There are cities that have raised revenue to increase more service,” Fried said. “There could be an opportunity cost on focusing too much on fare-free transit as opposed to good service quality that is consistent and within walking distance of most people’s homes.”

Residents are more likely to rely on a bus that comes every 15 minutes than one that comes every hour or two. As Laura Bliss pointed out in CityLab, a majority of Kansas City’s bus lines run every 30 to 60 minutes, which can make bus connections difficult.

That doesn’t mean cities shouldn’t consider making public transportation free, particularly for people who need it most — students, senior citizens, disabled people, and low-income riders. There are intermediate steps for metro agencies that can’t afford a systemwide fare-free program. Seattle, for example, is proposing an income-based fares program next year to replace its existing discounted fares initiative. And before this proposal, Kansas City provided free transit cards for students and veterans and operated a free downtown streetcar.

As with most transit experiments, it’ll take time before we can measure the success of Kansas City’s bus initiative. This is an optimistic move for the city, however, as it demonstrates lawmakers’ willingness to invest in buses as a transportation alternative to cars.

The 2021 Oscars are moving to April due to the pandemic. Should they?
A new House bill would bar companies from using nondisclosure agreements to hide harassment
“The presidency is a duty to care”: Read Joe Biden’s full speech on George Floyd’s death
Vox Sentences: House gives Senate the USMCA for Christmas
Beethoven’s 5th Symphony is a lesson in finding hope in adversity
Women donate to multiple candidates. But men tend to stick to people who look like them.