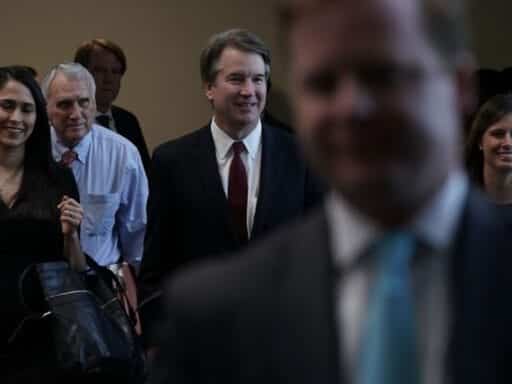 Trump’s Supreme Court nominee isn’t so sure the court should have compelled Nixon to turn over the Watergate tapes in 1974.

Supreme Court nominee Brett Kavanaugh’s views on presidential powers are not helping those concerned about the integrity of the Russia investigation sleep better at night. The latest development: the judge’s suggestion many years ago that the Supreme Court might have gotten it wrong when it compelled President Richard Nixon to turn over the Watergate tapes.

In the trove of documentation Kavanaugh turned in to the Senate Judiciary Committee as part of the confirmation process is a 1999 roundtable discussion where Kavanaugh floated the idea that maybe the United States’ highest court made a mistake in 1974. That’s the year it ruled unanimously in United States v. Nixon that the president had to hand over to a federal district court the tape recordings and other subpoenaed materials tied to the Watergate break-in. Mark Sherman at the Associated Press was the first to report the comments.

Kavanaugh’s belief in the importance of executive power is already under scrutiny, especially in light of special counsel Robert Mueller’s ongoing investigation and the possibility that Trump could be subpoenaed or, less likely, indicted. As Vox’s Jen Kirby points out, the Supreme Court could wind up hearing some element of the Russia investigation, and there’s a possibility Kavanaugh could be one of the justices to decide on the matter.

In a transcript of a roundtable discussion published in the January-February 1999 issue of the Washington Lawyer on attorney-client privilege, Kavanaugh suggested that the Nixon case might have been “wrongly decided.” Per the AP, he said:

But maybe Nixon was wrongly decided — heresy though it is to say so. Nixon took away the power of the president to control information in the executive branch by holding that the courts had power and jurisdiction to order the president to disclose information in response to a subpoena sought by a subordinate executive branch official. That was a huge step with implications to this day that most people do not appreciate sufficiently…Maybe the tension of the time led to an erroneous decision.

At another point, he said perhaps the court should have stayed out of the dispute altogether.

It’s not necessarily an open-and-shut case that Kavanaugh disagrees with the Supreme Court’s 8-0 decision on the Nixon tapes.

Bloomberg points out that in 1998, Kavanaugh in an article called on Congress to “codify the current law of executive privilege,” including the Nixon decision. And in a 2016 law review article, he cited the Nixon case among examples of the “greatest moments in American judicial history” when judges “stood up to the other branches, were not cowed, and enforced the law.”

Still, his 1999 comments in the Washington Lawyer roundtable raised eyebrows.

Harvard law professor and constitutional scholar Laurence Tribe in a tweet called them “deeply alarming.” University of Texas Steve Vladick said it was a “big deal” and could have implications for Mueller.

For those who see the Nixon tapes case as a triumph for the rule of law, this #Kavanaugh statement and the underlying analysis are deeply alarming — more so than his article urging Congress to shield sitting presidents from investigation and prosecution:https://t.co/rbZT5WTThv

This is a big deal.

If Judge Kavanaugh thinks Nixon is wrongly decided (on justiciability), he’s effectively arguing that a quasi-independent prosecutor in the executive branch can’t sue to enforce a subpoena against a sitting President.

That would surely cover Mueller, too… https://t.co/kIWg27ZTo6

In the 1990s, Kavanaugh worked on independent counsel Ken Starr’s investigation of President Bill Clinton, an aggressive probe that started off with a land deal and ended with a recommendation he be impeached for lying about an affair with Monica Lewinsky.

But after serving in President George W. Bush’s administration and getting an up-close look at the presidency, Kavanaugh’s views changed — now he believes a sitting president shouldn’t be investigated at all.

In an article for the Minnesota Law Review in 2009, Kavanaugh wrote that Congress should pass a law exempting the president from criminal prosecution and investigation while in office, including from questioning by criminal prosecutors or defense lawyers.

“I believe that the President should be excused from some of the burdens of ordinary citizenship while serving in office,” Kavanaugh wrote. “We should not burden a sitting President with civil suits, criminal investigations, or criminal prosecutions.”

He warned that indicting a sitting president and putting him on trial would “cripple the federal government.” He specifically expressed regret about the Clinton probe and suggested the president perhaps could have “focused on Osama bin Laden” had he not been distracted by investigations.

Kavanaugh’s assertions have alarmed those worried about the integrity of the Mueller investigation and, more broadly, many of President Trump’s legal entanglements. Vox’s Andrew Prokop recently explained the dilemma:

Now, this is in the context of calling for Congress to change existing law — not for the Supreme Court to interpret it differently. However, these beliefs and opinions could well influence how Kavanaugh would rule on the major topics related to civil or criminal investigations that do end up reaching the Supreme Court.

And these are topics of enormous importance to Trump, who’s facing not just the Mueller probe over Russian interference with the 2016 election, but a civil suit over his foundation and a defamation suit from Summer Zervos, who has said Trump sexually assaulted her.

With the discovery of his 1999 remarks, Kavanaugh just gave onlookers another reason to worry.

Kristin Lavransdatter is an amazing novel about how God doesn’t care if we live or die
4 primary races to watch in Pennsylvania
Some sage advice for Donald Trump about picking a fight with Bob Woodward, from Donald Trump
The dark underbelly of Amazon Prime Video
Why so many people who need the government hate it
Race is still the central dividing line in the Democratic Party