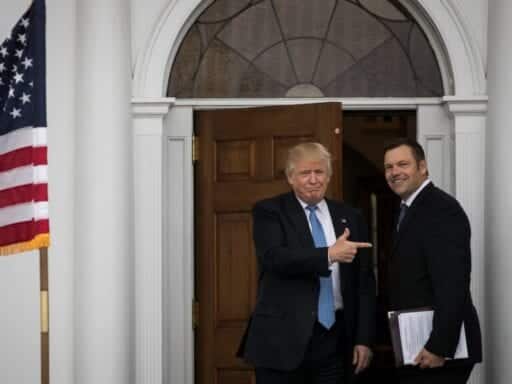 Kobach is running for governor of Kansas.

The president endorsed Kobach — a controversial conservative and staunch Trump ally who served as the vice-chair of Trump’s now disbanded voter fraud commission — in a Monday tweet ahead of Tuesday’s primaries.

Kris Kobach, a strong and early supporter of mine, is running for Governor of the Great State of Kansas. He is a fantastic guy who loves his State and our Country – he will be a GREAT Governor and has my full & total Endorsement! Strong on Crime, Border & Military. VOTE TUESDAY!

Trump noted Kobach’s early support for his presidency and called him “a fantastic guy who loves his State and our Country,” and added Kobach has his “full & total Endorsement.” It’s a ringing endorsement for the hardline conservatism Kobach embodies, and is especially noteworthy in light of a recent report by the Topeka Capital-Journal, in which two GOP consultants accused the Kobach campaign of employing three alleged white nationalists.

The three men — Kurtis Engel, Collin Gustin, and Michael Pyles — belong to the American Heritage Initiative, an offshoot of white nationalist group Identity Evropa. They were on the Kobach campaign’s payroll between June and July, and a campaign spokesperson told the newspaper the men did voter outreach including knocking on doors and delivering yard signs.

“Secretary Kobach isn’t a racist, and obviously, the campaign will not tolerate racism,” Koback spokesperson Danedri Herbert told the Capital-Journal. Hebert later disputed that the men were members of the American Heritage Initiative.

But this isn’t Kobach’s first brush with the movement. Kobach cited a white nationalist in a column for Breitbart, and once attended a writer’s workshop for the Social Contract Press, a publishing house that releases white nationalist material. Now, he has the endorsement of the president and a real shot of clinching the Republican nomination for governor.

Polls show Kobach and Colyer are locked in a close battle for the Republican nomination; Tuesday’s results will be another data point in the question of whether Trump’s endorsement is really what Republicans need to win nowadays.

The Kansas governor’s race has attracted national attention in part because of Kobach — a conservative with controversial, hardline views on voting access and immigration. There are seven Republicans in the race (and five Democrats), but Kobach and Colyer are certainly the most well-known.

Colyer hasn’t been in the governor’s mansion for very long; he was appointed in 2018 after former Gov. Sam Brownback became the Trump administration’s “Ambassador-at-Large for International Religious Freedom.” Colyer served as the state’s lieutenant governor under Brownback. He’s conservative, but Kobach has been trying to distinguish himself as the more conservative candidate and paint Colyer as a moderate.

Colyer, meanwhile, brought up Kobach’s history of being fined by a federal judge for going against a judge’s orders and misleading the court on a Kansas voting rights case. A federal court struck down Kansas’s proof of citizenship voting law, a brainchild of Kobach’s, as unconstitutional this year.

“Integrity is an issue for Republicans, and there is only one candidate on this stage who has been fined by a federal judge for lying,” Colyer said at a recent gubernatorial forum.

The Democrats include former Wichita Mayor Carl Brewer, state Sen. Laura Kelly, and farmer Josh Svaty. Kelly is seen as the leading candidate given her strong fundraising numbers and the fact that she was recruited by former Democratic Kansas Gov. Kathleen Sebelius (who later served as Secretary of Health and Human Services in the Obama administration). Kelly has also run into trouble over a controversial vote she took supporting voter ID laws.

There’s also an independent politician who is jumping into the general election, business executive Greg Orman, who unsuccessfully ran for US Senate in 2014. Some in Kansas politics worry Orman could potentially split the vote in the general election and deliver a win to Kobach.

Kobach also helped lead Trump’s now-disbanded electoral fraud commission, which was created after the president floated unsubstantiated accusations of widespread voter fraud in the 2016 election (a belief that Kobach seems to share).

More questions about the intent of the commission were raised last week, when one of its former members, Maine Secretary of State Matt Dunlap, essentially accused the commission of being set up to investigate a problem that didn’t exist. Dunlap sued to get the release of thousands of commission documents, none of which showed evidence of widespread or pervasive voter fraud.

“I think the reason why they disbanded it was because they really didn’t want anybody to know what they were talking about and working on behind the scenes, which was this report that was being framed up without any of our knowledge,” Dunlap told NPR’s Don Gonyea in a recent interview. “I think that speaks to what the goal was, which was to validate the president’s claims — not to do any type of investigation or explication of what those claims would actually look like or produce.”

Still, Kobach’s work on the commission underscores how loyal he is to Trump, who prizes loyalty above all. The president’s recent Kobach endorsement is another sign of Trump fashioning the Republican Party around loyalty to him.

Top Democrat says the House will impeach Trump, just not yet
How the UK found the first effective Covid-19 treatment — and saved a million lives
Inauguration week could turn violent, so Airbnb canceled all DC reservations
Taxpayer costs at Trump properties show the shamelessness of his “corruption” talk
What the right fears about Warren’s wealth tax
Turkey releases US Pastor Andrew Brunson in a big win for Trump