Like Kylie Jenner, I was on a Forbes list. Here are the hidden privileges that made me a “success.” 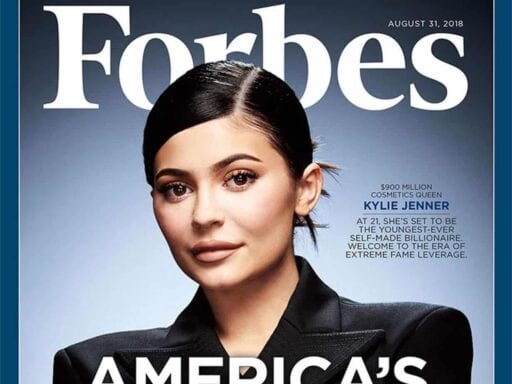 What doesn’t get said in the Forbes “self-made” successes list.

Gracing the cover of Forbes’s 60 Richest Self-Made Women issue this week was none other than Kylie Jenner, the 21-year old member of the Kardashian family dynasty and cosmetics mogul.

But the description of Jenner as “self-made” quickly inspired a backlash, given the wealth and fame of the family she was born into. This, in turn led to a conversation on social media about what it means to be self-made.

The problem with this particular cover, and more generally with magazine lists like these, is they often gloss over the role intergenerational wealth and access plays in success. This is especially true when that success is achieved at a young age. I should know. I was on the Forbes “30 Under 30” list this year for Law and Policy.

Lists like these — which fetishize achievement, particularly at a young age — erase the privilege and access that allow some of us to take career risks and be entrepreneurial in ways others can’t. They diminish the hard work done by people in more challenging circumstances and add to the myth that if you just work hard enough, you can pull yourself up by your own bootstraps. They ignore that some people have neither boots nor straps.

None of us are entirely “self-made”

I was featured for my work co-creating and leading the Resistance Manual, an organization that helps people get informed and get engaged in the political process. The “manual” itself is a wiki covering 15 policy areas, with pages for each state. I don’t know why they selected me for the list, but I do know that, even though the “30 Under 30” list doesn’t claim to be made up of “self-made” successes, they did send all finalists a questionnaire with questions about whether I was an immigrant, where I went to school, the amount of student debt I had at graduation, and how much debt I currently had. It also asked how much funding I’d raised for my company/enterprise and sources of funding. I don’t know how that information factored into their decisions.

The survey shows that the Forbes staff is obviously aware of the “hidden” advantages that often often contribute to success. In fact, for their list of the 400 wealthiest individuals, they even have a comically precise 10-point scale supposedly capturing how self-made people are. Forbes’s assistant managing editor told me that Kylie Jenner’s unpublished score would be a seven, reflecting that she got a head start from wealthy parents.

Of course, the truth is that none of us are entirely self-made. Most of us receive government support, for one thing. When asked, 71 percent of Americans say that they are part of a household that has used one of the six most commonly known government benefits — Social Security, Medicare, Medicaid, food stamps, welfare, or unemployment benefits.

And many people who benefit from government largesse fail to realize it: Sixty percent of Americans who claim the mortgage-interest deduction, which applies to homeowners, say they have never used a government program. If you’ve driven on public roads, gone to public school, or used the postal service as part of your business — well, we all rely on collective infrastructure to get ahead.

I certainly have. I went to public schools through eighth grade. My parents were able to save for some of my college costs through a plan that provides tax relief for those savings. I stayed on my parent’s health insurance until I was 26 under the Affordable Care Act. I have received the earned income tax credit, targeted at those with low or moderate income. I took out federal student loans to go to law school. I am enrolled in an income-based repayment plan currently as I pay them back and have also signed up for Public Service Loan Forgiveness. The way we discuss our successes as individual accomplishments and valorize some as “self-made” fails to acknowledge such systems of support.

What’s more, our current social structure makes being poor more expensive than being well-off. When I was taking LSAT prep classes, paying to take the LSAT, and paying application fees for law school, my parents covered those costs, meaning I didn’t have to take out a loan that would follow me for years.

My parents also helped me set up a bank account when I was 15, and helped me get a credit card when I was 18. If I had been unbanked and lacked a credit score, the interest rates on my student loans could have been higher. Such privileges, or lack thereof, are especially important for young entrepreneurs who need loans and investors to start their businesses.

We need to acknowledge that we don’t distribute opportunity equally

To be sure, I worked tremendously hard. I am sure that Kylie Jenner also works hard. But, I don’t think I’ve ever worked as hard as a mom who works multiple jobs for a minimum wage. Hard work is not enough. There are structures that impact success.

When it comes to wealth in this country, we no longer have a scarcity problem. We have a distribution problem. The world produces enough food to feed everyone, we have approximately five vacant homes for each homeless person in the US and the US spends twice as much on health care as other developed countries.

As Annie Lowrey points out in a Recode interview with Kara Swisher, there are reasons that a stronger safety net hasn’t caught on in the United States the way it has in other industrialized countries. One, is our strong individualistic culture and value of pulling ourselves up by our bootstraps. The second is racism. The wealthy pit poor white people against people of color by stoking politics of fear and resentment.

When holding people up as the hallmarks of success, we need to acknowledge that we don’t distribute opportunity equally — whether as the youngest billionaire or on a “30 Under 30” list.

Forbes failed that test spectacularly when it described Kylie Jenner as “self-made,” but many are guilty of the same flawed thinking, in a more limited way. We need to change our structures — both by strengthening our safety net for when people fall on hard times and by making sure people have equal opportunities to succeed in the first place — so access to opportunity is not just an accident of birth. And we can.

Aditi Juneja is a lawyer, writer, and activist. She is the co-founder of Resistance Manual and host of the podcast Self Care Sundays. She currently works for Protect Democracy.

Trump doesn’t need to jail families to enforce immigration laws. There are better options.
What happens if a presidential nominee gets the coronavirus?
Facebook is like sugar — too much is bad for you, says a top Facebook exec
Sanders and Buttigieg put out preliminary Iowa caucus results showing they both did well
A brutal video shows a black trans woman getting beat up by dozens of men
Antifa clashes with police and journalists in Charlottesville and DC