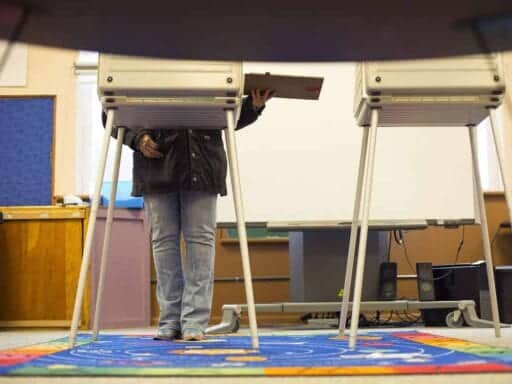 Another sign the Kremlin doesn’t seem to be giving up.

America’s top intelligence official, Dan Coats, said last week that “the warning signs are there” when it comes to Russia and other foreign governments waging cyberattacks on the United States. He made the point again, on Thursday, at the Aspen Security Forum in Colorado, capping off a wild week that began with Donald Trump buddying up to Vladimir Putin in Helsinki and taking the Russian president’s word over that of intelligence chiefs.

And as the midterm elections loom in November, it seems there’s already evidence of Russia interfering.

A Microsoft executive said at the Aspen Security Forum panel — the same that Coats and other US officials attended — that the company had detected phishing attacks targeting three US congressional candidates, a bit like the strategy the Russian GRU agents used in the 2016 election against the Democrats and Hillary Clinton.

Tom Burt, Microsoft’s vice president of customer security and trust, told the audience in Colorado that earlier in the year, the company discovered that a fake Microsoft domain had been created as a landing page, kind of a staging ground, to get candidates to click so they would be vulnerable to a phishing attack. “We saw metadata that suggested those phishing attacks were being directed at three candidates who were all standing for the election in the midterms,” Burt said.

Tom Burt, VP of security at Microsoft, says the company detected Russian phishing attacks on three candidates in the 2018 midterms “who would be interesting from an espionage perspective.” Wouldn’t reveal who they are. #AspenSecurity

The cyberattacks weren’t successful in hacking the three candidates. Burt didn’t identify them by name, but intriguingly described them as “interesting targets from an espionage standpoint.”

Burt said, according to the BBC, that Microsoft detected the suspicious activity on web domains that had been linked to a group tied to Russian intelligence that had been active in 2016.

The hacks are going to keep happening, even if Trump believes they aren’t

Microsoft’s account backs up what intelligence and law enforcement officials keep repeating — despite the mixed messages from the White House: Russia is going to keep hacking and trying to exploit American partisanship on social media.

When asked if Russia was still attempting to target the United States this week, Donald Trump said, “No.” The White House press secretary cleaned up his response, saying he meant to say “no” to more questions from reporters.

But the back-and-forth underscored the concerns about whether the US government is going to be able to fight off these attacks, and how they’ll be able to warn and inform the public, especially with Trump as “skeptic-in-chief.”

Top administration officials are moving forward with measures to counterattack such foreign attacks, with or without Trump. At the same forum, Deputy Attorney General Rod Rosenstein introduced the Department of Justice’s cyber-digital task force, a comprehensive report on what the threats are, the key targets, and how the US should fight them. When it comes to America’s political system, that’ll include everything from attacks on election infrastructure to the targeting of particular candidates to the propaganda and divisive news that Russian operatives spewed on social media. Russia tried each of those influence operations in 2016.

“Russian intelligence officers did not stumble on the idea of hacking American computers and posting misleading messages because they had a free afternoon,” Rosenstein said on Thursday. “It’s what they do every day.”

Brexit is here. But what happens next?
Report: Nonwhite jail officers were not allowed to guard George Floyd’s killer
Netflix’s Haunting of Bly Manor: The ending, explained
Three coronavirus task force members will quarantine after being exposed to virus
Masha Gessen on the frightening fragility of America’s political institutions
Cory Booker had a confusing answer about health care in his first 2020 press conference