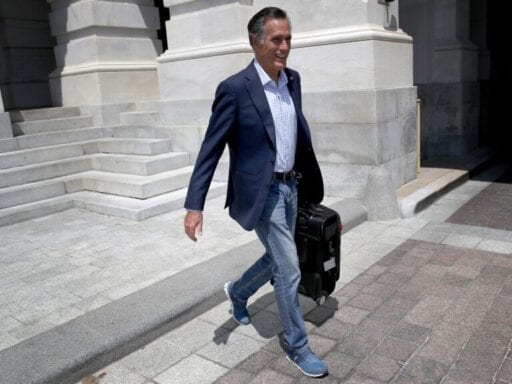 Utah Senator, former presidential candidate, and Trump critic Mitt Romney can now claim another title: person with an alternate Twitter account he uses to “Like” tweets featuring, say, surfboards with the Mitt Romney 2012 logo emblazoned upon them or to respond to tweets about his strategy regarding President Donald Trump.

The revelation of Sen. Romney’s alt-account came courtesy, in part, of an interview conducted by the Atlantic’s McKay Coppins. In response to a Trump tweet demanding the senator’s impeachment (which would be hindered by the fact that, historically, members of Congress and the Senate are immune from impeachment), Romney told Coppins that he follows political Twitter in his own way:

He explained that he uses a secret Twitter account—“What do they call me, a lurker?”—to keep tabs on the political conversation. “I won’t give you the name of it,” he said, but “I’m following 668 people.”

I’m hearing that the Great People of Utah are considering their vote for their Pompous Senator, Mitt Romney, to be a big mistake. I agree! He is a fool who is playing right into the hands of the Do Nothing Democrats! #IMPEACHMITTROMNEY

That level of specificity — 668 Twitter accounts is a very particular number of accounts for one to follow, especially when he outlined several of the types of people he followed — helped Slate’s Ashley Feinberg locate Romney’s account. Which is @qaws9876, user name “Pierre Delecto.”

Romney used the account to occasionally reply to tweets that reference himself, like this tweet located by Feinberg in which Romney responds to a critique from Fox News host Brit Hume.

In a phone call with Coppins, Romney confirmed the account belongs to him in perhaps the most Romneyian of ways: en français. Romney served his Mormon mission in France, spending 30 months evangelizing beginning in 1966.

Just spoke to @MittRomney on the phone, and asked him about Pierre Delecto. His only response: “C’est moi.” Updated my story accordingly: https://t.co/kcfIopokWh

Obviously, the internet responded to Feinberg’s revelation with glee, much like the time earlier this year when Romney blew out the candles on the birthday cake given to him by his staff (one made out of Twinkies, his favorite) by taking each birthday candle off the cake individually and blowing them out one by one.

That glee will likely be short-lived, however. The Twitter account has, regrettably, been made private. Nothing gold can stay, it seems.

5 key moments from Day 3 of Amy Coney Barrett’s Supreme Court hearing
Bernie Sanders’s failure to win over black voters on Tuesday could doom his campaign
How do you handle a tiny living space? We asked a Below Deck crew member.
Queen & Slim retells the Bonnie and Clyde myth as a story about blackness in America
The Senate impasse over the massive $1.8 trillion coronavirus stimulus, explained
Portrait of a Lady on Fire is the perfect Valentine’s Day movie