NASA has a new airplane. It runs on clean electricity. 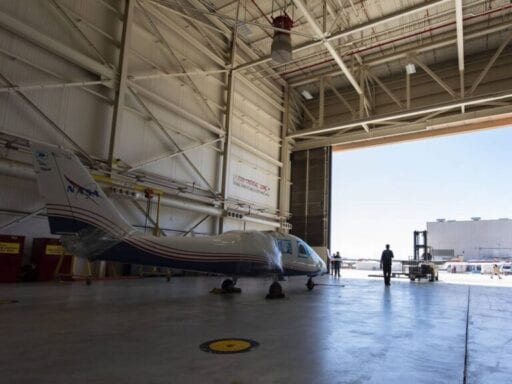 The new X-57 could help zero-carbon air travel take off.

NASA recently received an all-electric aircraft, the X-57 Maxwell, that will undergo testing in the coming months with the first flight expected in 2020. It’s a small step toward making zero-emissions air travel a reality, and it couldn’t have come at a better time.

While aviation emits about 2.4 percent of global greenhouse gas emissions, demand for flights is rapidly growing and the resulting emissions are on track to triple by the middle of the century. Meanwhile, scientists say that to limit warming this century to 1.5 degrees Celsius, the world will have to cut total emissions in half by as soon as 2030.

There are few options available for reducing overall emissions from air travel, which has led to the flying shame movement among travelers who find it difficult to reconcile their travel habits with their concern for the climate. Teen activist Greta Thunberg famously even crossed the Atlantic Ocean in a sailboat this summer to avoid the emissions from flying.

Engineers are trying to come up with ways to decarbonize air travel, and electrification is a promising prospect. “I believe it’s one of the hottest topics at the moment in aircraft engineering,” Andreas Schäfer, a professor of energy and transport at University College London, told me earlier this year.

An electric power system for aviation can be more efficient than conventional engines, unlock new aircraft designs, and when drawing on clean energy, emit zero greenhouse gases. Electric propulsion also stands to be less mechanically complicated and could, in theory, reduce operating costs, which is why some airlines want electric planes.

The new NASA aircraft, a modified twin-engine Tecnam P2006T from Empirical Systems Aerospace, is a small step in this direction. While there are already a few electric aircraft models on the market, like Pipistrel’s ALPHA Electro trainer plane, the X-57 project is unique because it’s not just testing an electric propulsion system, but also studying how electric motors can change the aerodynamics of the aircraft and create brand new designs.

The initial testing phase of the aircraft will use two electric motors mounted under the wings and spinning propellers, similar to conventional piston engines. The testing will then progress to a radically different design, one with a much thinner wing, with two main motors on the wingtips and 12 smaller motors along the leading edge of the wing.

The aim is for the smaller motors to add additional lift for takeoff and landing, folding away their propellers during the flight to reduce drag. With a narrower wing, engineers are aiming to increase the X-57’s cruise efficiency by 500 percent. Such a design would not be feasible with conventional engines.

So when will you be able to book a ticket for an electric plane? “[W]ith experimental technology, you’re dealing with stuff that either has never been done before or has not been done in the way currently being researched, so committing to a specific date is challenging,” NASA spokesperson Matthew Kamlet wrote in an email.

In addition to testing, risk-averse aviation regulators will have to come up with new safety protocols to govern components like the massive batteries electric planes will require. And though battery technology is improving, it’s nowhere close to aviation fuel in terms of energy density, so electric planes will be limited to shorter routes in the near future.

That means it will likely be decades before electric aircraft make a dent in the emissions from air travel. In the meantime, the difficult questions about the ethics of flying will remain.

Trump’s move to host the G7 at his Doral resort takes self-dealing to new levels
The surreal — yet normal — start to Amy Coney Barrett’s Supreme Court confirmation hearing
Ruth Negga’s moody, smoky Hamlet is a study in vulnerability
The US has a 2.5 billion-pound surplus of meat. Let’s try to visualize that.
The Trump administration’s latest steps to undermine the Affordable Care Act, explained
Police killings can be captured in data. The terror police create cannot.