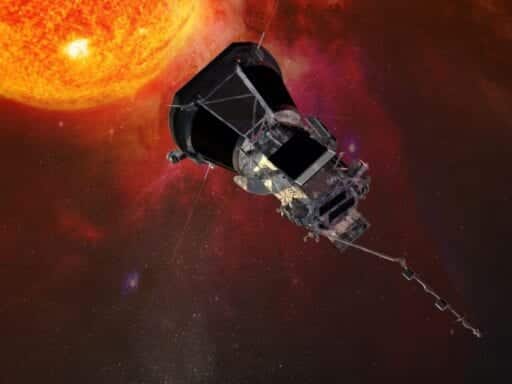 The Parker Solar Probe will try to solve the decades-old “coronal heating problem.”

There’s a question that’s been baffling solar physicists for decades: Why is the sun’s atmosphere so much hotter than its surface? The solar atmosphere, called the corona, is a violent and chaotic region of the sun that can spew out huge explosions of particles and plasma, generating “space weather” that can disrupt our communications down here on Earth.

The American Geophysical Union reports that during Hurricane Irma in 2017, a solar flare made radio transmissions in hard-hit areas more difficult. That is, the solar storm made the terrestrial storm a bit more dangerous. And scientists fear a big enough solar storm could knock out power grids.

To answer these questions, and to better prepare for solar storms, we’re going to the source of the mystery: the corona itself.

Early Sunday morning, NASA plans to launch a spaceship that will travel within 4 million miles of the sun’s surface — much closer than any spacecraft that has come before it. (The Probe was originally scheduled to launch on Saturday, but the launch was scrubbed after an issue with the rocket’s helium system arose, Space.com reports.)

The spacecraft is called the Parker Solar Probe. It’s named for scientist Eugene Parker, who first theorized the existence of solar wind — bits of matter so energized by the sun that they escape its gravity and spread out in all directions. The launch window for the mission begins this Saturday, August 11, but it could launch as late as August 23 if complications or foul weather get in the way.

The mission is a daunting engineering problem. As it closes in on the sun, the Parker Probe will have to deal with thousands of degrees of heat without melting.

“The sun is a star, and it’s alive every second,” says Nour Raouafi, the Johns Hopkins Applied Physics Lab solar physicist who is serving as the deputy project scientist on the mission. “And we are sending a spacecraft that is going to fly in this very atmosphere. This is making history.”

Here’s how we’ll get there, and why.

How to get to the sun

If all goes according to plan, starting around 3:30 am Eastern on Sunday, NASA will launch the Parker Probe from Cape Canaveral, Florida. If you’re game to stay up that late, check out the live stream of the launch below (or check back during daylight hours for a replay). The flames of the launch will look extra dramatic cast against the dark Floridian sky.

After launch, the probe will make its first pass of the sun in about three months. But it will actually take around seven years to dip down within 4 million miles of the solar surface and get a super-close look at the corona. (The corona extends outward about 5 million miles from the surface.) During those seven years, the Parker Probe will make use of Venus’s gravity to alter its orbit, gradually getting closer and closer to the sun.

Here’s the orbital trajectory, via NASA.

When the spacecraft does reach its closest approach in 2025, it will be traveling at a mind-warping 430,000 mph. And when it’s this close to the sun, we won’t be able to communicate with it at all. The sun itself is a huge radio transmitter; any signals from the Parker Probe will get lost in the noise.

The probe is equipped with a telescope to take photos of the corona, and with instruments to record magnetic activity and charged particles. All these instruments need to operate at around 85°F, which is a challenge considering the environment they’ll be operating in.

The temperature of the solar corona is millions of degrees, but the Parker probe won’t actually get that hot. For one, while the particles emitted by the sun are super hot, they’re not super densely packed together. Think of the difference between sticking your hand in a 212°F oven and in a pot of boiling water. The heat energy in the water is more densely packed, and it will instantly scald you.

That said, the Parker probe will still have to deal with 2,500°F heat on its closest approach to the sun, which is just about the temperature of magma.

Amazingly, Parker will be able to handle this heat. A carbon heat shield combined with a radiation system that runs on water will be able to keep the craft’s electronics from burning up. Here’s the trick: For this to work, the heat shield must always point in the direction of the sun (if you’ve seen the 2007 science fiction movie Sunshine, it’s a similar concept). The heat shield can’t tilt more than one degree in any direction without risking damage to the rest of the craft.

Here, you can watch NASA scientists take a blowtorch to the shield material. The heat doesn’t transfer through.

The components not covered by the heat shield are made of a molybdenum alloy, which has a melting point of more than 4,000°F.

The Parker Solar Probe will attempt to solve a decades-old mystery: why is the sun’s atmosphere so much hotter than its surface?

Imagine you are standing very close to its flames. It’s growing uncomfortably hot, isn’t it? So you step backward and you cool off.

This is what we expect to happen with sources of heat: The farther away we are from the center of the flame, the cooler it becomes. But this doesn’t happen with the biggest, baddest fire in the solar system, our sun.

The surface of the sun is around 10,000°F; its atmosphere, the corona, is around 2 million degrees, about 200 times hotter. It’s like if an airplane took off from ground level where it was 60°F, and then reached a cruising altitude where it was 12,000°F. It sounds preposterous. And the plane would melt.

Scientists call this weird phenomenon the “coronal heating” problem, and it has been stumping them for decades. In the early 1940s, scientists determined that one of the elements in the corona was a form of iron that had been stripped of 13 of its electrons, and it takes a massive amount of energy, in the form of heat, to pull electrons away from an atom of iron. But really, the mystery stretches back even further: When scientists first detected the iron in the 1860s, they mistook it for an entirely new element they dubbed “coronium.”

The coronal heating problem is just one of three interrelated mysteries the Parker Probe will collect data on in hopes of solving.

Another mystery is solar wind. This “wind” is composed of particles of matter being shot out from the sun’s corona in all directions. These particles get accelerated to speeds of millions of miles per hour, and no one knows exactly how. (Solar wind is why we have aurora borealis and aurora australis — the northern and southern lights — at our poles. Earth’s magnetic field deflects the wind particles to the poles, where they collide and ionize in a brilliant light show.)

Last is the mystery of coronal mass ejections. These are the sudden explosions of plasma and particles that spew from the sun and could potentially knock out power grids on Earth. We don’t completely understand the physics of these explosions; nor can we predict when and where they will happen (and if Earth will be in the crosshairs).

All of these phenomena are part of what scientists call space weather. Scientists believe there are two processes that may contribute to energizing these phenomena to incredible speeds. One involves magnetism. “When you twist magnetic fields, they are like rope,” or rubber bands, Raouafi explains. “When you twist it, you store energy in it, and when it releases, it releases energy into the plasma.”

A second involves special waves generated in the plasma in the solar corona called Alfvén waves. Raouafi says you can think of particles of matter riding these waves like a surfer rides a wave in the ocean. “The longer they stay on the wave, the more energy they can extract from that wave; that energy will serve to take them further and further,” he says. “Particles can also ride waves, and by riding waves, they can extract energy in the form of heat and [acceleration].”

Scientists know that both processes may be involved in all these coronal mysteries, but they don’t know how much of a role each plays — and we can’t figure it out from here on Earth. Plasma and particles ejected from the sun get altered and degraded on their journey here. More simply: By the time they reach Earth, they no longer carry the information about how they were created. “We need to go there in the corona to figure it out,” Raouafi says.

This is a cool first for space exploration: we’re studying a star up close

The Parker Probe mission scientists are hoping to collect the data that will help explain the coronal heating problem. But, as Raouafi says, the mission is also about pure exploration. The probe will be the closest human-made object to a star.

“Potentially, every observation we’re going to make is a discovery,” he says. The probe will send back data about the sun’s magnetism and energy output, as well as pictures of the solar corona up close. And what we learn about our own star will help us understand the stars like it in the greater galaxy and universe.

Science often operates on a decadal scale, and questions usually grow more complex before they are answered. It’s very possible that the Parker mission will just generate more confounding mysteries.

“The Parker solar probe will help us understand all the scientific questions that have been puzzling us for decades,” Raouafi says. “But it also has the potential to really rewrite the future of solar and heliophysics by making big discoveries of phenomena we know nothing about now.”

In other words, Raouafi and his team are literally reaching for the stars.

Facebook allowed companies to post job ads only men could see. Now that’s changing.
Sen. Claire McCaskill suffers cracked rib from Heimlich maneuver
What a recent Covid-19 flight outbreak tells us about spread on planes
The man without a name
Vox Sentences: Will Assange face trial in the US?
The best things to eat and drink to fight wintertime dread