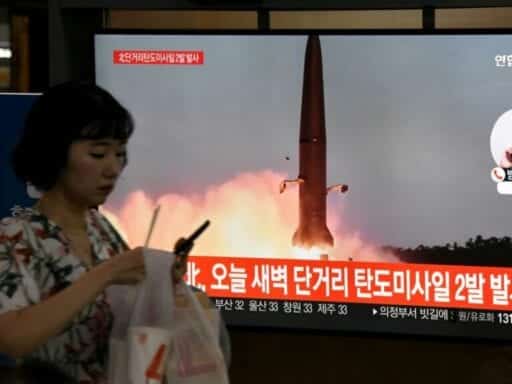 Share
Loading...
A woman walks past a television news screen showing file footage of a North Korean missile launch, at a railway station in Seoul on July 31, 2019. | Jung Yeon-je/AFP/Getty Images

If at first you don’t succeed, try, try again. That’s North Korea’s motto these days, as it just launched its fourth set of projectiles — likely missiles — in less than two weeks.

Reports indicate that the projectiles were fired off North Korea’s west coast and then flew across the country before landing in waters off the east coast. That would differ from the previous three launches that all took off from the country’s eastern shores. It’s too early to tell what kind of projectiles were launched. The last three were either a short-range ballistic missile or rocket shot from a new launcher.

But the motive is more apparent: North Korea is really angry at Seoul and Washington. A statement from a North Korean Foreign Ministry spokesperson on Monday afternoon blasted the US and South Korea for holding a long-planned military exercise, although it was scaled down to lower tensions with Kim’s regime.

That clearly hasn’t worked. “Despite our repeated warnings, the United States and South Korean authorities have finally started the joint military exercise targeting the DPRK,” the spokesperson said. “Its aggressive nature can neither be covered up or whitewashed in any manner.”

This is typical for North Korea. It doesn’t like it when the US and South Korea practice military operations together. Pyongyang views the drills as preparations for war and perhaps the precursor to an invasion.

But North Korea’s displeasure is also likely exacerbated by the lack of progress in its negotiations with the US over dismantling Pyongyang’s nuclear program.

The two countries have been at an impasse for months over a core issue: Kim wants Trump to lift sanctions on his country before he gives up some of his weapons, and Trump wants Kim to give up nearly all of his weapons before he lifts the sanctions. As a result, the two sides remain locked in a stalemate.

Meanwhile, those sanctions have impeded South Korea from building closer political and economic ties with its neighbor. Put together, North Korea remains under financial strain with no prospects of reversing its fortunes any time soon.

Neither country has the “political will” to follow through on their negotiations with North Korea, an article from the state-run Korean Central News Agency read on Monday evening.

That’s why some experts I spoke to say North Korea has increased the pace of launches lately to signal that it’s unhappy. President Donald Trump, however, isn’t really listening.

The Trump administration’s response to the recent uptick in tests has been to brush them off.

Trump’s stance is that North Korea is more likely to dismantle its nuclear program as long as he and Kim remain friendly. That consideration seemingly outweighs almost anything else going on between the two countries.

Which is why Trump will likely shrug off this latest test, just as he has with all the others over the past two weeks. “I have no problem,” Trump told reporters outside the White House earlier this month about the other recent tests. “These are short-range missiles.”

On one hand, it’s reasonable, and perhaps even prudent, for Trump and his administration not to overreact to Kim’s weaponry. It’s better not to blow up any chance of diplomatic progress over a few missile tests, no matter how threatening.

On the other hand, some experts say the administration could do much more than brush off those provocations.

“Maybe they’re picking their battles to focus on resuming much-needed negotiations for a deal,” Duyeon Kim, a North Korea expert at the Center for a New American Security think tank in Washington, told me nearly two weeks ago after Pyongyang’s first of three recent missile tests.

“But if they continue to dismiss smaller missiles for long, they’re enabling Pyongyang to strengthen these dangerous weapons and telling South Korea and Americans living there that they don’t matter,” she added.

Facebook bans blackface and certain anti-Semitic conspiracy theories
How this chair became a pop culture icon
The TikTok vs. Trump battle continues with a lawsuit
Here are the best and most substantive answers of the third Democratic debate
Let a harried handywitch steal your heart and teach you practical magic in this charming audio drama
Black Lives Matter helped shape the 2020 election. The movement now has its eyes on Georgia.