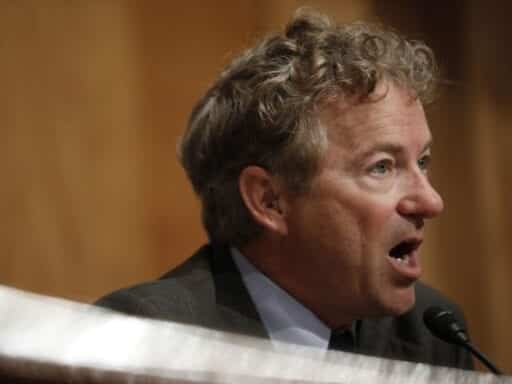 Sen. Rand Paul, the libertarian-leaning lawmaker from Kentucky and a recurring troublemaker for the GOP, says his mind still isn’t made up on Supreme Court nominee Brett Kavanaugh. Given Republicans’ slim margin in the upper chamber, Paul’s vote could be pivotal for securing Kavanaugh’s seat on the high court, and his indecision is increasingly putting other lawmakers on tenterhooks.

“I am honestly undecided. I am very concerned about his position on privacy and the Fourth Amendment,” Paul told Politico’s Burgess Everett in an interview. “This is not a small deal for me. This is a big deal.”

Paul is part of a small set of Republicans who are seen as possible swing votes that could join with Democrats to block Kavanaugh. Unlike Republican Sens. Lisa Murkowski (AL) and Susan Collins (ME) — lawmakers Democrats have tried to appeal to by using the issues of health care and abortion — Paul’s primary gripe with Kavanaugh is his track record on privacy. These concerns loom large since Sen. John McCain’s current absence from the upper chamber means that only one Republican vote could theoretically sway the fate of Kavanaugh’s nomination.

“Kavanaugh’s position is basically that national security trumps privacy. And he said it very strongly and explicitly. And that worries me,” Paul said, per Politico. In a 2015 opinion, Kavanaugh backed the constitutionality of the National Security Agency’s warrantless surveillance program, a ruling that civil libertarians opposed.

“In my view, that critical national security need outweighs the impact on privacy occasioned by this program,” Kavanaugh wrote at the time. He aligned himself with other members of the DC Circuit in choosing not to rehear a court challenge to the NSA’s metadata surveillance efforts — programs that received more scrutiny after whistleblower Edward Snowden exposed their scope.

Among Republicans, Paul has long been seen as one of the most stalwart champions of stricter privacy protections. In 2015, he spoke for almost 11 hours on the Senate floor in an effort to protest the reauthorization of surveillance programs expanded via the Patriot Act. He’s also often worked with Democratic Sen. Ron Wyden (OR) on measures aimed at reforming government spying programs.

Despite the concerns he’s vocalized about Kavanaugh, however, it’s likely Paul could still end up backing the nominee due to overwhelming pressure from the Republican conference and the senator’s close ties to President Donald Trump. Just this spring, Paul caved on a vote for Secretary of State Mike Pompeo, even though he had initially expressed staunch opposition to the nomination.

Paul’s issues with Kavanaugh’s stance on privacy are something he reportedly expressed even before the nomination was officially announced. Per The Associated Press, Paul had said he had qualms about Kavanaugh’s actions during the Bush administration as discussions were still underway about the potential Supreme Court pick. Majority Leader Mitch McConnell had even cited Paul’s concerns with the Bush administration’s “hawkish” policies among the potential stumbling blocks for Kavanaugh, according to The New York Times.

Paul’s not the only one questioning Kavanaugh’s take on privacy.

Rep. Justin Amash, a fellow Republican in the House, might not have a vote, but he’s been beating the drum on Kavanaugh’s privacy positions and has worries about the nominee’s position on the Fourth Amendment’s protections against unreasonable searches and seizures. “The only question is will the Senate confirm one who is really bad on the #4thAmendment, when so much is at stake in upcoming digital privacy battles,” Amash wrote in a tweet.

There are many potential nominees with a conservative record on abortion, guns, and regulations. The only question is will the Senate confirm one who is really bad on the #4thAmendment, when so much is at stake in upcoming digital privacy battles. https://t.co/31OmMYB8L3

In his 2015 opinion regarding the NSA, Kavanaugh had said he thought the agency’s surveillance programs were “entirely consistent with the Fourth Amendment,” a view with which both Amash and Paul vehemently disagree. Paul has also wondered whether Kavanaugh’s vote would cancel out that of Justice Neil Gorsuch if a privacy case comes before the Supreme Court. In his Politico interview, Paul said that he’s especially worried that the government could expand its spying powers as technology evolves.

The 2015 case isn’t the only one that offers some insight into Kavanaugh’s approach to privacy. In a 2010 opinion, Kavanaugh argued that the government’s use of GPS to track a suspect without a warrant was also in line with the Fourth Amendment. The Supreme Court ended up ruling that such efforts were unconstitutional.

Wyden, Paul’s frequent Democratic co-conspirator on privacy legislation, is apprehensive about Kavanaugh’s history on the matter a well. “This nominee’s record as it relates to metadata, as it relates to location tracking, is right out of the Big Brother program,” he told Politico.

Paul has made a name for himself as a notorious disruptor of Republican efforts, causing a scene on a number of votes, only to ultimately join with the rest of the GOP after making his point. It’s possible that could happen again this time around.

Paul drove the Senate into a short-lived shutdown earlier this year, when he insisted on voting on an amendment to a government spending bill — something McConnell opposed. The lawmaker also went back-and-forth against Republicans in the fight over the Affordable Care Act last year, though he ultimately relented and supported a key vote on the GOP repeal. The same pattern has played out on several occasions including Pompeo’s nomination.

Paul’s adversarial tactics — including his filibuster-like moves on the NSA’s surveillance programs, have raised awareness about the issues he’s focused on — though critics argue that they ultimately lack substance.

As one GOP aide told The Hill after Paul’s role in February’s government shutdown, “[Paul is] the perennial annoying gadfly with no positivity associating with it. What he did didn’t change the outcome. He’s all about grandstanding.”

It remains to be seen whether his Kavanaugh concerns will result in more concrete action — or if they are, in fact, just talk.

How old should a president be?
Democrats — and Trump — declare victory on USMCA
Songs to wash your hands by: Memes are an unexpected ally in the fight against coronavirus
Netflix’s To All the Boys: P.S. I Still Love You shows its predecessor didn’t need a sequel
Why Dracula absolutely slaps
Greyhound will no longer consent to warrantless searches by border patrol agents