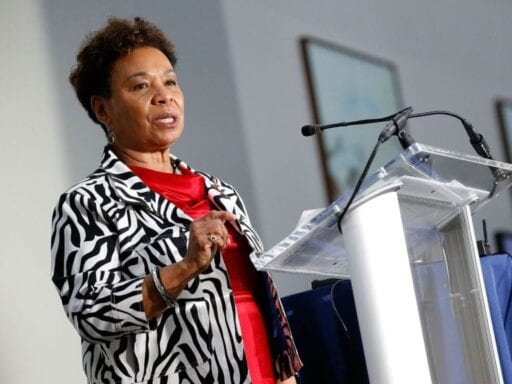 Another Democrat is officially throwing her hat in the ring for House Democratic Caucus chair: Rep. Barbara Lee (D-CA) officially announced her bid on Monday.

Lee joins fellow California Democrat Linda Sánchez in the race for caucus chair — the spot vacated after Chair Joe Crowley’s primary loss to Alexandria Ocasio-Cortez. Sánchez, who currently is the vice chair of the Democratic Caucus, announced she would run last week.

“I am so inspired to fight alongside you as we work to win back the majority,” Lee wrote in a letter to colleagues released Monday. “There is nothing more important than returning bold Democratic leadership to Congress. With that in mind, I’m excited to announce that I am seeking the position of House Democratic Caucus Chair for the 116th Congress.”

The caucus chair is the No. 4 House Democrat. Whoever holds the position plays an important role, including running meetings of the entire Democratic caucus and helping steer Democrats’ legislative and party policy agenda. Caucus chair is also considered a stepping stone to higher levels of leadership — including House speaker or minority leader.

Democratic leadership hasn’t changed for years — the three at the top are House Minority Leader Nancy Pelosi (age 78), Minority Whip Steny Hoyer (79), and Assistant Democratic Leader Jim Clyburn (77). Some Democrats within the House are clamoring for a shake-up that results in younger, more diverse members getting into leadership positions.

One of the biggest concerns among rank-and-file lawmakers is that major policy decisions are relegated to the leadership in both parties, leaving many individual lawmakers and even committees without much agency. It’s easy to see why Lee is running on the message of giving everyone a seat at the table.

“Our caucus is at its best when everyone has an opportunity to contribute and collaborate,” she wrote in the letter. “My top priority will be offering new ways to engage all members. I will provide robust member services to empower everyone in our caucus and develop more forums to showcase your innovative work.”

If either Sánchez or Lee succeeds in their bids, it would be the first time a woman has held the position of Democratic Caucus Chair in the House.

Lee could get a boost from members of the Congressional Black Caucus and the Congressional Progressive Caucus, both of which she has helped lead in past years. But Sánchez has the advantage of already being the caucus vice chair, which could make for an easy transition.

Unlike some of her colleagues, Lee told Vox recently she has not heard grumbling about the need for leadership changes at the very top, including some calls from within the caucus for Pelosi to step aside.

Pelosi has said she will run for House speaker if Democrats take control of the House in 2018, even though more than 20 Democratic candidates for House and several lawmakers say she needs to let someone else take the top spot.

Sánchez, currently the No. 5 Democrat in the House, is one of these people. Sánchez called for a leadership change last fall, and reiterated that call this month.

“I think it’s time for that generational change,” Sánchez said. “I want to be part of that transition, because I don’t intend to stay in Congress until I’m in my 70s.”

Lee is not calling for the same type of change — at least not yet.

“I think the House leadership has really done a good job,” Lee said. “I think our leadership has broadened the participation of a lot of new members. We have to continue to strengthen it, but I think at least from what I’m hearing, most members see the fact it has been moving in the right direction. But there are other members talking about leadership changes very publicly. I haven’t been one of those, I think we’ve got to stay unified.”

8 Can’t Wait, explained
Study: Trump rallies may be responsible for an estimated 700 Covid-19 deaths
Netflix’s American Murder is mesmerizing even if you’re already familiar with the Watts murders
The moral case against Trump’s travel ban
Judy Blume’s seminal Are You There, God? It’s Me, Margaret is becoming a movie
It’s okay to let your transgender kid transition — even if they might change their mind in the futur...