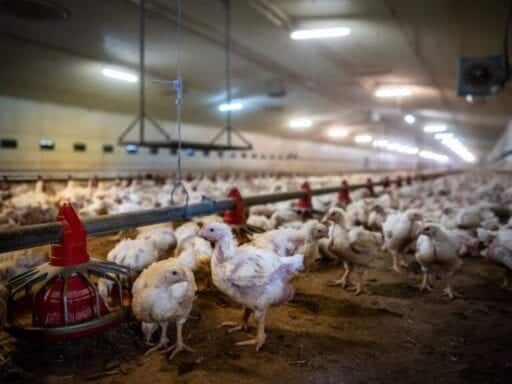 Share
Loading...
Thousands of chickens are seen in a chicken coop, in Kondrajec Panski, Poland on October 1, 2019 | Photo by WOJTEK RADWANSKI/AFP via Getty Images

What the advice to replace beef with chicken in your diet is missing.

“If you’re worried about climate change, drop beef from your diet and replace it with chicken.” That’s the advice we’ve been hearing from some environmentalists and scientists for years — but it’s only half right. Sure, dropping beef is good for the climate. But if you really want to do what’s best for the Earth, it’s time to drop the chicken, too.

The recommendation to swap beef for chicken is certainly understandable: Beef is responsible for more greenhouse gas emissions than any other animal product.

Here’s another stat that might best sum up the change: From 1990 to 2013, global poultry production increased by 165 percent while global beef production only increased by 23 percent.

This switch and the relentless favorable comparisons of chicken over beef have had an unfortunate side effect: they’ve ended up obscuring the poultry industry’s many serious problems. Without question, when it comes to meat, the beef industry is still the largest contributor to climate change. But the chicken industry is pretty bad, too. Its impact on the climate only looks benign when compared with beef’s. Greenhouse gas emissions per serving of poultry are 11 times higher than those for one serving of beans, so swapping beef with chicken is akin to swapping a Hummer with a Ford F-150, not a Prius.

And while climate change is a grave environmental threat, it’s far from the only one. Air and water pollution, degradation of arable land, habitat destruction, species loss, and massive ocean dead zones are all collateral damage of meat production. The poultry industry plays a big part in that despoliation. As the poultry industry has exploded in recent decades, so has its impact on ecosystems around the world.

Sure, switching from beef to chicken is by comparison better for the climate. But is eating all this chicken good for the planet? Not at all.

America’s favorite meat (and why it’s a problem)

Our high chicken consumption can be chalked up to a simple shipping mistake. In 1923, a hobby egg farmer in Delaware named Celia Steele ordered 50 chickens — but received 500. Instead of returning them, she raised the birds for meat and turned a profit.

Three years later, Steele constructed a barn to house 10,000 birds at a time. In the following decades, the poultry sector became increasingly industrialized, and today, nearly all chickens raised for meat — 9 billion in the United States each year — are crammed into dark warehouses longer than football fields.

These chicken farms profoundly harm local communities. Drive through any rural area in my home state of Georgia, the country’s top chicken-producing state, and you’ll see row after row of long, windowless sheds, each containing tens of thousands of chickens being raised for meat. Nearby, you might see (and smell) enormous mounds of what the industry calls poultry “litter,” a term that downplays its menace: It is a mix of chicken poop, spilled feed, feathers, and bedding material. These feces-dominated mountains dot the landscape in many rural parts of America, and they’re a growing problem for nearby residents — and all who live downstream.

That’s because rather than undergoing a treatment process as human waste does, poultry excrement is typically spread on nearby cropland as fertilizer. The amount of waste is so tremendous, however, that much of it is not absorbed; it runs off fields and into streams and rivers. The resulting oversaturation of nutrients like nitrogen and phosphorous can cause algal blooms that deplete oxygen in the water, killing or dispelling aquatic animals for miles. Some algal blooms are toxic and endanger humans and our companion animals. Put simply, the poultry industry is given license to use America’s public waters as its own unregulated, open sewer system.

This flood of chicken poop is a nasty problem, but the process of growing chickens’ feed may be even more harmful. According to the World Wildlife Fund, the poultry industry uses most of the world’s feed crops, with the pork industry coming in second. Overall, feed production occupies an astounding third of the world’s cropland. This land could more efficiently be used to produce food for humans to eat directly.

This inefficiency also has consequences for global water supplies. Per calorie, the water footprint of chicken is nearly six times larger than that of grains like wheat and oats. To be sure, beef does require much more water than chicken — about 3.5 times more — but both require more water than most plant-based foods.

Bad for humans, bad for chickens

Then there’s the human cost. People also suffer at the hands of Big Chicken. Workers on poultry slaughter and processing lines, many of whom are women, immigrants, and people of color, are among the most exploited in the United States, with higher rates of injuries than in most industries, since they perform repetitive motions for hours on end with minimal downtime.

According to an Oxfam report, some workers wear diapers because they can’t take bathroom breaks. To make matters worse, most employees fear speaking out against abusive conditions because they are undocumented immigrants and could be deported. In fact, an ICE raid at a Koch Foods chicken processing plant in Mississippi this summer took place just a year after 100 workers there won a $3.75 million lawsuit against the company for racial discrimination, national origin discrimination, and sexual harassment.

Human health is also at risk. Compared with the beef industry, the chicken industry uses double the antibiotic feed additives. Scientists warn of the dangers of using antibiotics in animal feed, which has been linked to antibiotic resistance and the troubling explosion of antibiotic-resistant infections.

And then there are the chickens themselves. For every steak we swap with a plate of wings, we cause many more animals to suffer. The industry must slaughter about 200 chickens to get the same amount of meat they’d get from a single cow. Chickens are just as capable of experiencing pain as dogs and cats, yet we cram them into warehouses and breed them to grow so fast that often their bones break and organs fail. They live miserable lives and die horrific deaths. And in most cases, they suffer far more than beef cattle, who have more legal protections, suffer fewer health problems, and are generally less intensively confined.

People mean well when they encourage switching from beef to chicken. But we are not really choosing the lesser of two evils. While perhaps not as bad for the climate, chicken is, by many measures, more harmful to the planet, our health, and animals. So the next time someone recommends that we swap beef with chicken, do them one better: Swap beef and chicken with more plants.

Leah Garcés is the president of Mercy For Animals and author of Grilled: Turning Adversaries into Allies to Change the Chicken Industry.