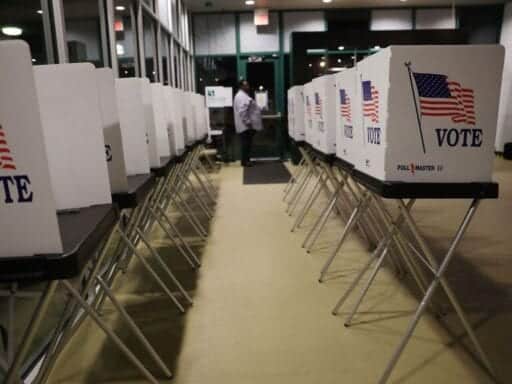 The fight over voting rights in key 2018 states, briefly explained.

The political fight in the 2018 midterm elections isn’t just about winning over voters. It’s about how difficult it should be for people to vote in the first place.

Across the country, Republican governors, secretaries of state, and state lawmakers — some of whom are on the ballot this fall — have been tightening the restrictions on voting in dozens of states citing concerns about voter fraud.

The result is that voters in North Dakota, Ohio, Missouri, Kansas, and New Hampshire, among other states, are facing restrictive voter ID laws and purges of voter names from the rolls. These restrictions often benefit Republicans, studies have found, because minorities, young voters, and others who might struggle to meet their requirements often vote Democratic.

In Georgia, allegations of voter suppression against black voters have reached a boiling point — heightened by the fact that the Republican candidate for governor, Brian Kemp, is also the current secretary of state and in charge of state elections.

Voter fraud is extremely rare. As Vox’s German Lopez has written, a study by Loyola Law School professor Justin Levitt found just 35 credible allegations of fraud from 2000 and 2014 — out of more than 800 million ballots cast. But Republicans have hammered on the specter of voter fraud for years, and President Donald Trump made a pet issue since winning the election while losing the popular vote in 2016.

All levels of government and Law Enforcement are watching carefully for VOTER FRAUD, including during EARLY VOTING. Cheat at your own peril. Violators will be subject to maximum penalties, both civil and criminal!

Trump has plenty of allies in Republican secretaries of state, including Kemp in Georgia, and Kansas Secretary of State Kris Kobach. Kobach was the vice-chair of Trump’s since-disbanded voter fraud commission that found no evidence of widespread voter fraud after the 2016 election.

This debate comes two weeks before an election when voter enthusiasm seems to be surging. The numbers show very high turnout in states with early voting like Nevada, Texas, Florida, and others. Here’s where the laws stand with 11 days to go.

1) Georgia: Georgia’s “exact match” voter ID law was passed by the Republican-controlled state legislature last year. Kemp, who is running for governor while holding office as secretary of state, is overseeing its implementation.

The law requires the information on government-issued identification, such as a driver’s license or Social Security card, to match up exactly with the name on a voter registration application. If they don’t match — even because of something like a missing hyphen, an extra space, or a typo — the applicant has to take extra steps to verify their identity.

That law has some serious consequences, according to a recent report from the Associated Press’s Ben Nadler. About 53,000 voter registration applications are in limbo at the secretary of state’s office because the information on the applications doesn’t exactly match up with names on drivers licenses or Social Security cards. The vast majority of those applications belong to black voters, an AP analysis found, and some aren’t even aware their applications are being held up.

These voters can still vote in the election, as long as they bring an acceptable form of photo ID to the polls (like a driver’s license), but voting rights advocates fear the move will confuse voters about whether they’re allowed to vote and disenfranchise those without photo IDs.

2) New Hampshire: Voting advocates scored a big win in New Hampshire this week, when Hillsborough County Superior Court Judge Kenneth Brown issued an injunction striking down Senate Bill 3 — a law recently passed by Republicans that essentially forced the state’s voters to prove they lived in the ward or town where they were trying to vote.

The bill was trying to make sure voters had documented proof that they lived in the place they were voting, but voting rights advocates argued it could make it more difficult for college students, the elderly, and homeless residents to vote.

Brown agreed, ruling that the law could not go into effect before the midterms because it had the potential to confuse voters and create long lines unnecessarily. But the state has challenged and said they will still use the new registration rules on Election Day.

3) North Dakota: The US Supreme Court recently decided not to overturn a controversial North Dakota voter ID law that could make it more difficult for the state’s Native American residents to vote in 2018. The law requires voters to have an identification that shows their name, date of birth, and most importantly, residential address.

4) Missouri: Like in New Hampshire, voting rights advocates scored a recent legal victory with just a few weeks to go until the election. Cole County Judge Richard Callahan ruled the state needed to stop circulating advertisements suggesting voters needed to bring a photo ID to the polls to vote — as an ID without a photo is also acceptable under state law.

Callahan’s reasoning in his ruling was that advertisements from the state about the identification needed to bring to the polls were confusing voters and allowing local elections officials to interpret the law the wrong way. The state has said it will appeal the ruling, but it likely won’t be decided until after November 6.

5) Kansas: Kansas’s controversial 2013 voter ID law required voters to provide proof they were US citizens in order to register to vote. It was struck down by a federal judge in June, but it’s still getting a lot of attention this year because it was pushed by Kansas Secretary of State Kris Kobach, who is currently running for governor.

Kobach is synonymous with restrictive voter ID bills. He’s also a close ally of Trump, who he supported in 2016 and whose voter fraud commission he joined. The commission was ultimately disbanded, and reports from the White House showed it found no evidence of widespread voter fraud. But Kobach has made voter ID laws part of his legacy, and could go further as governor.

Voter purges have been on the rise since the Supreme Court overturned a key part of the Voting Rights Act in 2013, allowing nine states to more aggressively police their voter rolls without permission from the federal government, including removing names. This gives states the opportunity to remove the names of people who have died or been incarcerated, but in a handful of states, it impacted voters who simply hadn’t voted in the past few elections. Here are some important examples:

1) Georgia: As secretary of state, Brian Kemp has overseen the purging of 1.5 million names from the state’s voter rolls from 2012 to 2016, according to NYU’s Brennan Center for Justice. That’s double the amount it purged from the voter rolls from 2008 to 2012.

In 2017, Kemp’s office removed more than 500,000 voter names from the rolls, according to a joint investigation from APM Reports, the investigative radio show Reveal, and Atlanta public radio station WABE.

Some of these removals were removing names of people who had died, but the investigation found that about 107,000 people had been taken off the list because they hadn’t voted in previous elections. While Kemp insists he’s been on par with past secretaries of states in Georgia, the numbers show an increase in names removed.

2) Ohio: The US Supreme Court recently ruled that Ohio can continue its controversial practice of purging voter names from the rolls. The state has a similar practice to Georgia, where names are removed from voter rolls if voters don’t vote in two federal elections in a row — a total of four years — and don’t confirm their address with the state by sending back postcards to state officials validating the address that’s on file.

This law was challenged in the courts, and while lower courts found it to be a violation of the National Voter Registration Act, the US Supreme Court disagreed. The crux of the Supreme Court ruling said that because the state wasn’t only taking names off the roles because of a failure to vote (but also factoring in whether voters were verifying their addresses or not), the practice was constitutional. The Supreme Court’s liberal justices dissented in the case.

3) New York City: The New York City Board of Elections has a persistent problem with missing names on its voter rolls; every year, names of registered voters don’t show up when they go to cast ballots (something that happened again during the 2018 state primary).There’s a reason New Yorkers are suspicious: the New York City Board of Elections illegally purged about 200,000 voters off the city’s rolls in 2014 and 2015, an issue discovered during the 2016 elections.

The board did two things: It manually identified and purged the records of more than 100,000 voters who had failed to vote or update their forms since 2008, and cut another 100,000 voters it suspected to have moved outside of the city from the rolls.

Both moves were illegal under state and federal law. After the suit, the board of elections agreed to institute reforms. Though there were some missing names in 2018, it doesn’t appear to have been nearly as widespread as in years past.

4) Virginia: Virginia’s voter purges first got attention in 2013, when the state used the Crosscheck database to try to identify voters who they believe had moved out of state and no longer needed to be on the rolls. However, as the Brennan Center report found, the database wasn’t accurate in many cases, leading to legitimate voters still in-state being cut.

And from 2012 to 2016, the state has removed slightly more than 379,000 names from the rolls than it did from 2008 to 2012, according to the Brennan report. Researchers from Brennan argue that some of those people are citizens who are eligible to vote, and were removed illegally.

Former Google employees who say they were fired for organizing are filing labor charges against the ...
The 5 million Americans that 2020 candidates refuse to talk about
Banning straws might be a win for environmentalists. But it ignores us disabled people.
5 things to know about Bernie Sanders’s aggressive climate strategy
California’s attorney general gave a scathing Spanish-language rebuttal to Trump’s speech
The good, bad, and weird of Kristen Stewart’s queer Christmas rom-com