Sen. Kirsten Gillibrand drops out of presidential race after failing to qualify for next debate 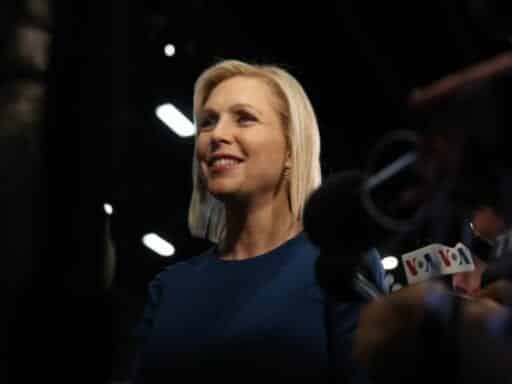 Despite her high-profile tenure in the Senate, Gillibrand was unable to gain momentum.

Kirsten Gillibrand, a two-term senator and longtime advocate of the #MeToo movement, has officially dropped out of the 2020 race for the presidency.

A New York Democrat who’s known for taking on the military over its problems with sexual assault and for championing a 9/11 bill that helped first responders cover health care costs, Gillibrand struggled to translate that profile into a national campaign that polled above 1 percent.

Following middling performances at the June and July Democratic debates and a failure to qualify for the September debate, Gillibrand officially called it quits in an interview with the New York Times on Wednesday.

Today, I am ending my campaign for president.

I am so proud of this team and all we’ve accomplished. But I think it’s important to know how you can best serve.

To our supporters: Thank you, from the bottom of my heart. Now, let’s go beat Donald Trump and win back the Senate. pic.twitter.com/xM5NGfgFGT

Gillibrand was one of a historic number of women running for the Democratic nomination and had established a platform heavily centered on the potential for women to power the party. As a leading sponsor of legislation to advance paid family leave and abortion rights, she intends to continue emphasizing this message as a member of the Senate.

Gillibrand’s campaign struggled to take off

Despite being a well-established and popular New York senator, Gillibrand had a tough time picking up momentum in both polls and fundraising after she launched her candidacy.

Her campaign attributed her stalling with donors to a couple of factors, including blowback from members of the Democratic establishment over her decision to call for the resignation of then-Sen. Al Franken after he faced allegations of sexual misconduct. Gillibrand, who’s long been an outspoken advocate for the #MeToo movement in Congress, stood by her decision and argued that she couldn’t hold Franken to a different standard than others who have been accused of such behavior.

Critics questioned Gillibrand, too, over her ideological evolution on issues like immigration and gun control, policy areas where she’s significantly shifted her stance after taking over her Senate seat.

“Politicians who never change their mind, who never thought they were wrong, who never wished they did it differently, I would question that as well,” Gillibrand told Newsday in a story on her changing positions. “Because you learn and you grow and you become a stronger, better person and you recognize where you didn’t have it right and you recognize where you did and you move forward.”

During her time in the Senate, Gillibrand has established herself as a champion for gender-related issues including combating sexual assault in the military and on college campuses. Additionally, she’s seen as playing an integral role in pushing through legislation that guarantees funding for health care coverage for 9/11 first responders.

Gillibrand’s so-called “failure to launch” was surprising and likely tied to potential blowback related to Franken, as well as a very competitive field where her progressive positions and backing for gender equity weren’t significant enough differentiators.