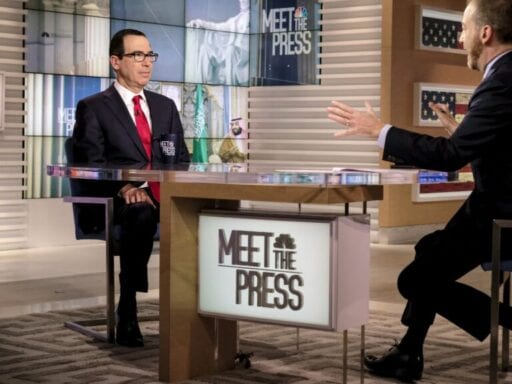 The treasury secretary is not a big fan of “details.”

Treasury Secretary Steve Mnuchin did a tour of the Sunday news talk shows, ostensibly to discuss the Trump administration’s escalation of sanctions on Iran. But he also faced questions about a growing scandal surrounding Trump’s efforts to get the Ukrainian government to investigate the Biden family — and his efforts to handle them did not go well.

In particular, Mnuchin was unable to explain a mysteriously large foreign aid payment to Ukraine, one that came weeks after the administration held up aid payments to the country altogether. He also struggled to account for why it’s appropriate for the Trump administration to attack a son of Democratic presidential candidate Joe Biden for his international business dealings, while Trump and his children profit from businesses he still owns.

One cringe-inducing moment came on Meet the Press, when host Chuck Todd asked Mnuchin to explain why Ukraine was provided with $140 million more in US aid than initially expected. Todd asked Mnuchin to account for “how all of the sudden, when the [Ukraine] aid got released, more money showed up. Where did [it] come from? … they got an additional $140 million they didn’t expect.” Mnuchin hemmed and hawed for about 20 seconds before trying to move on.

Todd was referencing Ukrainian President Volodymyr Zelensky’s announcement earlier this month that his country received $140 million more than they expected from the United States — one that came weeks after any US government aid to Ukraine was held up, and at the end of a summer in which President Donald Trump and his lawyer, Rudy Giuliani, repeatedly asked the Ukrainians to open a “corruption” investigation aimed at implicating Hunter Biden, a son of the former vice president. The Treasury Department oversees foreign aid payments, but Mnuchin’s answer was underwhelming.

“You’re getting into details,” Mnuchin said, declining to do so himself. He then alluded to Trump’s desire for Ukraine to investigate the Biden family and said, “these were not connected issues.”

Mnuchin doesn’t have a response when Chuck Todd asks him if he can explain “how all of the sudden when the [Ukraine] aid got released, more money showed up. Where did [it] come from?…They got an additional $140m they didn’t expect”

Mnuchin’s failure to answer such a basic question will do little to quell suspicions that the payment has something to do with Trump and Giuliani’s efforts to strongarm the Ukrainian government into looking into Hunter Biden — public cajoling that continued on Monday and that some see as an effort to benefit the president’s reelection campaign, given that Joe Biden is currently the frontrunner for the Democratic nomination.

Todd gave Mnuchin an opportunity to explain the $140 million payment and put conspiracy theories to rest. But Mnuchin, for reasons that remain unclear, didn’t take it.

As Hayes Brown explained for BuzzFeed, Ukraine “has been attempting to defeat Russian-backed separatists in the eastern part of the country since 2014 and has counted on military aid from the US to help that effort.” But the American commitment to Ukraine appeared to suddenly be in doubt on August 28, when news broke that a $250 million aid package to the country was on hold.

It is still unclear why the funding package was held up, but as Brown notes, the president’s personal attorney, Rudy Giulliani, met with an aide to Zelensky just a week before the August 28 announcement. But then, the aid package was suddenly released on September 12 after a bipartisan outcry from Congress — right around the same time that information began to emerge about a scandal involving an intelligence community official’s whistleblower complaint regarding communications between Trump and Zelensky.

“Now I can say that we have excellent relations with the USA,” Zelensky said at the time. “I think we are really moving in the right direction and we have the right relationship with our strategic partner — the United States of America.”

While Giuliani and Trump have publicly admitted that they urged Zelensky to pursue “corruption” investigations, they’ve denied using the foreign aid package as leverage. If there’s an alternative explanation, however, the Treasury Secretary doesn’t seem to know it.

Questions about the extra aid payment to Ukraine weren’t the only ones Mnuchin struggled with during his Sunday morning media tour.

During an interview with CNN’s Jake Tapper, Mnuchin struggled to explain how he can defend Trump asking a foreign government to launch investigations involving the children of a political rival when he would presumably feel differently if a Democrat was going after the Trumps.

“What I do find inappropriate is the fact that Vice President Biden, at the time, [his] son did very significant dealings in Ukraine,” Mnuchin said.

That prompted Tapper to retort, “I don’t understand — so it’s okay for Donald Trump Jr. and Eric Trump to do business all over the world, it’s okay for Ivanka Trump to have copyrights approved all over the world while President Trump is president, but while Vice President Biden was vice president, his son shouldn’t have been able to do business dealings?”

Mnuchin, echoing the dodge he used on Todd, told Tapper, “I don’t really want to go into more of these details.”

TAPPER: If Obama pressured a foreign leader to look into Don Jr, would you not find that inappropriate?

MNUCHIN: What I find inappropriate is Biden’s son doing business in Ukraine

T: So it’s okay for Don Jr & Ivanka but not for Biden?

M: I really don’t want to go into details pic.twitter.com/2WpMA6XWrR

As Anya van Wagtendonk explained for Vox, “there is absolutely no evidence [Biden] was involved in his son’s business dealings in Ukraine, nor is there evidence that he did anything illegal,” despite the dark insinuations made by Mnuchin, Trump, and Giuliani had made over the past week — and the glaring hypocrisy involved in them.