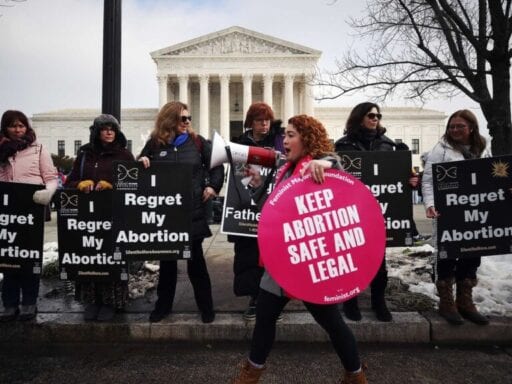 Share
Loading...
Protesters on both sides of the abortion issue gather in front of the Supreme Court building during the Right to Life March on January 18, 2019. | Mark Wilson/Getty Images

Abortion access in America hangs by a thread. The unraveling began a decade ago.

This year, five states passed laws banning abortion before most people know they’re pregnant. Alabama passed a ban on the procedure at any stage of pregnancy, with no exceptions for rape or incest. In Ohio, lawmakers introduced a bill that would create a crime called “abortion murder,” punishable by life in prison.

For many, restrictions like these would have been unthinkable just a few years ago. But as we look ahead to 2020, the anti-abortion movement could be on the brink of its biggest success yet: dismantling the landmark Supreme Court decision Roe v. Wade.

At the turn of the decade, statehouses went red across America. Republicans gained control of 11 state legislatures and increased their majorities in three more; in some places, like Alabama and North Carolina, they erased Democratic majorities that had existed since the 19th century. When the votes were counted, the GOP had added 680 seats in state legislatures around the country.

On abortion, the impact was swift and powerful. Teresa Fedor, a Democrat who has served in the Ohio legislature since 2001, remembers that before 2010, “Democrats were able to really have an impact on policy.” After 2010, when Republicans took control of the state House of Representatives and the governors’ mansion, she told Vox, it was “a full-on assault against women’s reproductive rights.”

In the next year alone, five anti-abortion bills passed in Ohio, Fedor said. The same thing happened around the country: Overall, more abortion restrictions were passed in 2011 than in any year since Roe established a right to the procedure in 1973.

It’s easy to look at the current landscape of abortion law in America — Southern and Midwestern states passing restriction after restriction, abortion-rights groups fighting back in the courts — and assume that it’s always been this way. After all, abortion opponents have been backing restrictions on abortion for decades. But 2010 is when they really started winning — and when their victories began paving the way for getting rid of Roe.

In fact, one of the laws passed in the wake of those elections is scheduled to go before the Supreme Court this spring, giving the justices an opportunity to revisit, and potentially gut, the protections for abortion set forth in the landmark decision. The result could be a country where people in blue states (or those with the money to travel) can legally end a pregnancy, while people in the South and Midwest (especially poor people and people of color) cannot. And what happened in 2010 doesn’t just explain how America got to this point — it’s a roadmap for what’s at stake in the 2020 election and beyond.

The pace of abortion restrictions skyrocketed after 2010

Abortion opponents have been working to restrict the procedure since before Roe v. Wade was decided. The National Right to Life Committee, which describes itself as “the nation’s oldest and largest pro-life organization,” opened its doors in 1968. Three years later, Americans United for Life, which writes model legislation to help states pass abortion restrictions, was founded.

Groups like these had successes in the wake of Roe, like the passage of the federal Partial-Birth Abortion Ban Act of 2003, which banned a medical procedure called intact dilation and extraction, a type of abortion performed in the later stages of pregnancy. Versions of this bill also passed at the state level.

But the pace of restrictions was, by today’s standards, relatively slow. Then came the 2010 elections.

There were a lot of reasons for Republican wins that year. The Great Recession was technically over, but Americans were still hurting — “people were losing jobs, and people were getting foreclosed on,” Elizabeth Nash, senior state issues manager at the Guttmacher Institute, told Vox. Around the country, Tea Party candidates ran on platforms of fiscal responsibility and low taxes, presenting themselves as an alternative to the Democrats who controlled the White House and both houses of Congress.

Meanwhile, there was widespread racist backlash against the election of former President Barack Obama, stoked by then-reality TV host Donald Trump and other “birthers” — in August 2010, a CNN poll found that a full 27 percent of Americans thought the president was “definitely” or “probably” not born in the US.

The result at the state level was a landslide. Republicans won majorities in 11 state legislatures, including Ohio, Indiana, and Alabama. They strengthened their majorities in Texas, Georgia, and Florida. They also won 11 governorships previously held by Democrats, including in Ohio and Iowa.

Some candidates — like Sam Brownback, who was elected governor of Kansas — ran on a staunchly anti-abortion-rights platform, but many didn’t. In some cases, Nash said, “I think people didn’t necessarily know quite how conservative they were” on the issue.

It soon became clear, however: “You started to see abortion restrictions just fly through state legislatures” once the new Republican majorities were seated in 2011, Nash said.

Ohio is just one example. In 2011, the state passed legislation banning public hospitals from performing abortions in most cases, as well as prohibiting health insurance policies from providing abortion coverage to local government workers, Fedor said. The same year, Ohio lawmakers introduced the first “heartbeat” bill, which would have banned abortion as soon as a fetal heartbeat can be detected, which can be as early as six weeks’ gestation.

It didn’t pass, but state legislators put it forth again and again. During debate of a bill in 2015, Fedor spoke publicly about her own abortion for the first time. She had become pregnant through rape, she told her fellow lawmakers in the Ohio House of Representatives. “I dare you to walk in my shoes,” she challenged supporters of the bill. “I understand your story, but you don’t understand mine.”

That bill also failed, but a version of it passed earlier this year, along with others like it in states from Kentucky to Georgia. These bills have all been blocked by courts for now, but if allowed to go into effect, they would function as near-total bans on abortion.

For Fedor, watching the march of restrictions in Ohio wasn’t just a political defeat — it was traumatic. “It really had an impact, like PTSD, for those of us who are serving [in] this capacity and experienced that life situation,” she told Vox. “It was very hard, very hard.”

While near-total bans like the one in Ohio — and one in Alabama that prohibits abortion at all stages of pregnancy — have captured a lot of attention this year, other laws passed in the wake of the 2010 elections have had even more impact on the ground. In 2011, Texas passed a measure requiring an ultrasound and a 24-hour waiting period before a person could get the procedure. A North Dakota law passed the same year required that patients be given information on a possible link between abortion and breast cancer, even though studies have shown no such link.

Abortion opponents in state legislatures also introduced new provisions for clinics or doctors, such as the requirement that doctors performing abortions have admitting privileges at a local hospital. In May 2011, for example, the recently elected Brownback signed an admitting privileges law in Kansas.

Abortion opponents cast the new requirements around ultrasounds and admitting privileges as necessary to protect the health of people seeking abortions. “For 45 years, the Supreme Court has said that the states can protect maternal health and fetal life,” and such restrictions were a way for states to do that, Clarke Forsythe, senior counsel at Americans United for Life, told Vox.

But abortion-rights groups have countered that the added requirements don’t actually serve any medical purpose. The result, meanwhile, has been to make it much harder to get an abortion in many of the places where Republicans came into power in 2010.

Low-income Americans already struggled to pay for the procedure because Medicaid is barred from covering most abortions, Marcela Howell, founder of the group In Our Own Voice: National Black Women’s Reproductive Justice Agenda, told Vox. Following the passage of the Affordable Care Act, many states added restrictions on abortion coverage to their exchange plans, and some added restrictions on private insurance coverage as well.

Waiting period laws meant patients had to come to a clinic twice, often taking time off work and paying for child care for their kids, as a majority of people who get abortions are parents, Howell added.

Meanwhile, new restrictions on clinics caused dozens to close across the South and Midwest. Between 2011 and 2017, those regions lost a total of 83 clinics, with about half of the clinics in Ohio and Texas shutting their doors.

That means that many people seeking abortions now have to go to another city or even another state to get the procedure, adding yet another hurdle to the difficulties caused by waiting period laws and other restrictions. “The barriers sort of compound themselves to mean that people find themselves in the position where they aren’t actually able to access abortion care,” Howell said.

This March, the Supreme Court will hear arguments in June Medical Services v. Gee, which concerns a 2014 Louisiana law that’s nearly identical to the one at issue in Hellerstedt. This time, though, many believe that the court — on which conservative Justice Brett Kavanaugh now sits — will decide to uphold the law, paving the way for states to introduce more and more clinic restrictions and make abortion harder and harder to get.

In some ways, the road to Gee started with Roe in 1973. Abortion opponents have been working to overturn the 1973 decision ever since, as well as to pass restrictions within its limits. “This is a long-term, coherent, consistent attempt to pass health and safety regulations,” Forsythe said.

But 2010 was a crucial turning point in that road.

For some, it’s also a reminder that even though presidential and congressional elections tend to get the most attention, state legislators are often the ones with the most control over abortion access in America.

That could become even more true if the court finds in favor of Louisiana, which would give states broad leeway to restrict abortion, according to Nash. “Who’s sitting in those legislative chambers will be really important,” she said.

For abortion-rights advocates, meanwhile, what happened in 2010 is a lesson in the importance of getting out the vote at state and local levels. To that end, In Our Own Voice has launched a campaign called I Am a Voter, aimed specifically at black voters, who have historically had high turnout rates in presidential elections but not necessarily in other races. The campaign is about “holding those people you vote for accountable,” Howell said.

States like Virginia, where Democrats won control of both chambers this year, are an encouraging sign for legislatures around the country, she added. “I expect that we will see that some of them will flip as people pay more and more attention to how those elected officials impact their lives,” Howell said. Indeed, unusually high turnout in Virginia may have helped carry Democrats to victory this year.

Fedor, too, is looking to the future, including the 2020 election. She believes that the current trend of abortion restrictions in Ohio goes against the character of the state.

“Ohioans don’t go to extremes,” Fedor said. “We are down the middle and we honor and value fairness.”

And, she added, “When things aren’t fair, the course can be corrected.”