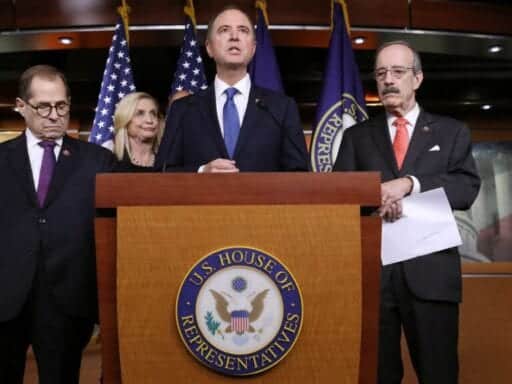 “The importance of public hearings is to make the case to the American people,” a Democratic lawmaker said.

The evidence against President Donald Trump is overwhelming.

Witness after witness after witness in the House Democrat-led impeachment inquiry has outlined a clear quid pro quo in which Trump and his administration withheld US military aid from Ukraine in order to compel the new Ukrainian president to open investigations that would benefit Trump politically in the 2020 presidential election.

And yet House Democrats announced this week that they’ll begin holding public hearings starting next week — prolonging the investigation and, crucially, a vote on whether or not to impeach the president.

The question, then, is why? Why continue the probe and commit to days of open testimony that will almost certainly devolve into a partisan political circus? Especially when some Democrats involved in the inquiry say they already have enough to impeach Trump?

According to Democratic House members and aides I spoke to, there are two main reasons. First, they believe that the process of impeaching a president requires a completed probe. “We have a responsibility to follow through with the full investigation,” Rep. Joaquin Castro (D-TX), a member of the House Intelligence Committee that leads the inquiry, told me Thursday.

Second, Democrats say they must hold hearings on camera so that the American people can see what investigators have already learned behind the scenes — and perhaps glean some new information. “The importance of public hearings is to make the case to the American people,” Rep. Ro Khanna (D-CA), a House Oversight Committee member involved in the inquiry, told me.

The open hearings, then, will serve as part ongoing examination, part public relations campaign before any steps are taken to impeach the president (or not). Which means the next few days and weeks will likely be particularly raucous, both on Capitol Hill and across the country.

The closed-doors hearings have uncovered an established, indisputable fact pattern: that there was a quid pro quo with Ukraine and that the president is implicated in it.

But Democrats I spoke with said that outside of Washington and the politicians, political junkies, and journalists obsessively following the nitty-gritty details of the investigation, most Americans are far less up to speed on what the investigation has uncovered.

The public hearings will give Democrats a chance to change that.

“Many of the Democrats who won seats in key districts have come out in favor of an impeachment inquiry, but they haven’t endorsed impeachment,” a Democratic congressional aide told me. “There’s a need to shore up support from people in their districts, and ideally put more pressure on Republican senators.

“Video and audio are powerful mediums for humans,” the staffer continued. “The facts of Watergate were well established, but it was the Nixon tapes that sunk him.”

Yet some Democrats worry that prolonging the impeachment inquiry could lead to unnecessary stumbles. For instance, witnesses may not be as frank on camera as they were speaking behind closed doors in a Capitol Hill basement.

Still, most Democrats say that the benefits outweigh the potential costs.

The open sessions will also introduce most members of Congress to the facts of the case. Only three House committees — Intelligence, Oversight, and Foreign Affairs — have participated so far, making the majority of lawmakers unfamiliar with what’s been said in the closed testimonies. Giving them intimate familiarity with the quid pro quo evidence might steady them against skeptical constituents.

Finally, most say Democrats just have a duty to keep the American people informed about something as consequential as impeachment. “It’s important that Americans hear the evidence for themselves directly from these witnesses,” Castro told me.

Khanna agrees: “We have had the grand jury investigation phase where the evidence is overwhelming. Now we are in the trial phase to present that evidence simply and convince our fellow citizens and senators that the president compromised our national security and abused his office.”

The timeline for wrapping the entire House impeachment drama is still in flux. But the consensus for now is to have open hearings done before the Thanksgiving recess — “though that’s not hard and fast,” one staffer told me — and to hold a floor vote on articles of impeachment by mid-December. “It’ll partially depend on how hearings go next week,” another Democratic aide said.

“Everyone’s got a plan until they get punched in the mouth,” the first staffer concluded.

Which means the upcoming sessions won’t just serve as a political spectacle, they’ll also be the compass for the direction the impeachment process is heading. That makes next week even more consequential than it already is expected to be.

My year of free mattresses
Spike Lee’s purple and gold Oscars suit pays tribute to Kobe Bryant
The ironic invisibility of the loudest man in America
Miss Fisher’s Murder Mysteries was a beloved cult hit. Now there’s a movie, out this year.
Amazon will spend $5 million to prop up Seattle businesses harmed by coronavirus precautions
Vox Sentences: The latest twist in the Kavanaugh saga