The Saudi Arabia-Canada fight, explained in under 600 words 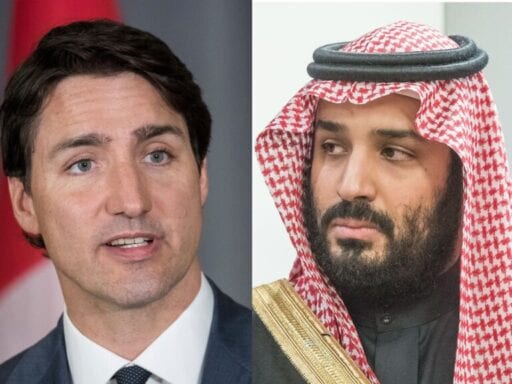 A short guide to why Saudi Arabia is waging a diplomatic war on Canada.

Saudi Arabia and Canada are in the middle of a full-on diplomatic crisis.

In the past week, Saudi Arabia has:

So what did Canada do that was so offensive? Its foreign ministry sent a tweet.

One was Samar Badawi. An acclaimed activist herself, she’s also the sister of Raif Badawi, a blogger who’s been imprisoned in Saudi since 2012 and subjected to public flogging. Raif Badawi’s wife and their three children fled to Quebec in 2015 and have since become Canadian citizens.

On Thursday, Canada’s foreign minister, Chrystia Freeland, tweeted she was “Very alarmed to learn” of Samar Badawi’s arrest, adding, “Canada stands together with the Badawi family in this difficult time, and we continue to strongly call for the release of both Raif and Samar Badawi.”

The next day, Canada’s foreign ministry issued a tweet calling on Saudi Arabia to “immediately release” Samar Badawi as well as “all other peaceful #humanrights activists.”

That royally pissed off the Saudi government.

In a series of tweets on Sunday, Saudi’s foreign ministry slammed Canada’s statement as “an overt and blatant interference in the internal affairs of the Kingdom of #SaudiArabia.”

The fight just escalated from there — on the Saudi side, at least.

The Saudi crown prince is not messing around

The recent arrests are part of a wider human rights crackdown by Mohammed bin Salman, the 32-year-old crown prince who’s next in line to the throne.

MBS (as he’s known) has been hailed in the West as an “ambitious, energetic” young “reformer” who’s upending the kingdom’s conservative ways and ushering in a new era of modernization.

But while he’s initiated some reforms, including lifting the ban on women driving, he’s also ruthlessly consolidated power and cracked down on dissent, arresting many of the activists — including Samar Badawi — who championed those same reforms.

In November, as part of an “anti-corruption campaign,” MBS rounded up hundreds of influential businessmen, including many in the royal family, imprisoning them in the Riyadh Ritz-Carlton and seizing millions of dollars.

MBS has also pushed an aggressive foreign policy — overseeing the disastrous war in Yemen, spearheading a diplomatic blockade of Qatar, and cultivating close ties with the Trump administration.

Bessma Momani at Canada’s University of Waterloo says the fight between Saudi Arabia and Canada should be interpreted in this context. “[T]his is less about Canadian foreign policy than it is about the Saudis,” Momani wrote in the Globe and Mail.

“This is a new, bold Saudi Arabia trying to make its mark on global and regional affairs,” Momani continued. “Led by the young and very brash Crown Prince Mohammed bin Salman … this latest move is yet another red line that is being used to rile up nationalists and assert Saudi dominance.”

So while this fight may have technically started over a tweet, it has a lot more to do with one man’s power and ambition. And that man is next in line to rule Saudi Arabia.

Trump makes his trade war pitch: “Tariffs are the greatest!”
The Vox Senate interview: Doug Jones on how Democrats can win in the South
All eyes turn to Apple as antitrust investigations heat up
The Trump-Ukraine scandal, explained in one minute
We need oxygen to live. The Nobel in medicine winners discovered how we adapt to changing levels.
The 18 best TV shows airing right now