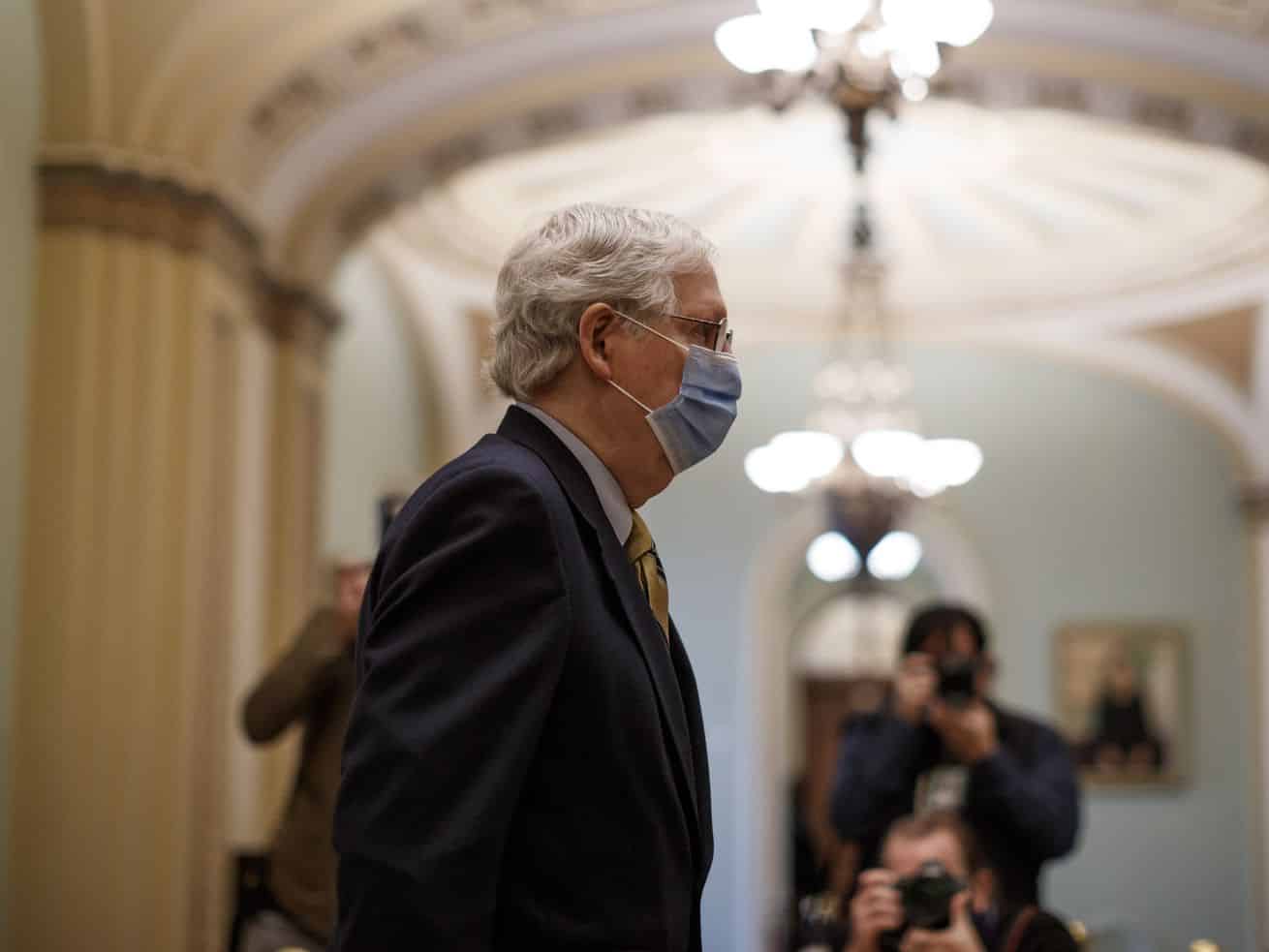 A majority of senators found Trump guilty, but they did not reach the 67-vote threshold needed to convict.

Former President Donald Trump has now been acquitted in his second impeachment trial, after the Senate failed to meet the 67-vote threshold needed to secure a conviction.

In total, a majority of senators (57) convicted him while 43 lawmakers acquitted him of the one charge he faced — inciting an insurrection at the Capitol — after a brief five-day trial in which neither side used its full time for arguments and no witnesses were called. Unlike Trump’s first impeachment trial, when Sen. Mitt Romney was the only Republican to find him guilty, seven Republicans did so this time around — making this the most bipartisan Senate conviction vote ever. These Republicans were Sens. Richard Burr, Bill Cassidy, Susan Collins, Lisa Murkowski, Mitt Romney, Ben Sasse and Pat Toomey.

House impeachment managers repeatedly argued that convicting Trump would set a precedent for future presidents and Congresses about the type of conduct that cannot be condoned: In this case, Trump for months perpetuated unfounded lies about election fraud and stoked outrage among his supporters, ultimately fueling a deadly attack on the Capitol, during which five people died. An acquittal, they argued, would mean presidents have the power to engage in this sort of behavior — and that there’s nothing wrong with doing so.

“Decisions like this which will define who America is as a people,” Del. Stacey Plaskett (D-VI) said.

The two sides ultimately took very different approaches in the trial: the prosecution laid out a case showing how Trump undercut the democratic process and emphasized the degree of violence that resulted, while the former president’s defense largely questioned the Senate’s jurisdiction over impeachment and tried to divert the attention from his actions.

The final outcome of the trial is not particularly surprising: Although Republicans expressed horror about the attack, many had signaled that they didn’t think what Trump did was impeachable or took issue with the constitutionality of the trial. Because the outcome was somewhat known, both parties were eager to move through the proceedings quickly, with Republicans uninterested in dwelling on Trump, while Democrats are eager to advance their legislative agenda. (Senators will now take a week-long recess following the trial.)

In the end, a majority of Senate Republicans opted to stand by Trump, rather than confronting him — a sign that most of the party isn’t distancing itself from the former president at all.

The roughly week-long impeachment trial included an emotional and visceral recounting of the insurrection that took place at the Capitol on January 6, with House managers using both video and social media to demonstrate how Trump’s actions directly led to the attack. Utilizing never-before-seen security footage from the US Capitol, managers detailed the brutality of violence toward Capitol Police, and showed how rioters had near misses with lawmakers.

“We all know that awful day could have been so much worse,” said Rep. Eric Swalwell (D-CA).

House managers, too, laid out how Trump fueled the attack with months of lies about election fraud. Both prior to January 6 — and on that day — Trump repeatedly urged his followers to contest the certification of the election results, and “fight” the outcome. The managers pointed to statements by his followers who said they were storming the Capitol on his behalf.

“Donald Trump summoned the mob. He assembled the mob and he lit the flame,” Rep. Joaquin Castro (D-TX) emphasized.

Managers also noted Trump’s failure to condemn the violence at the Capitol outright, and laid out his history of encouraging violence, including at his rallies. Trump ultimately put out a video statement on January 6, during which he told attackers to “go home” while also calling them “very special.”

“The strongest evidence of Trump’s dereliction of duty during and after the attack has always been Trump’s own public statements on that day and his own deafening refusal to say ‘stop the attack,’” a senior House aide emphasized. “This conduct speaks louder than anything else.”

Democrats — much like they did in the first impeachment trial — noted that the biggest risk of not convicting Trump is that he continues to undermine America’s democracy and incite violence in the future, including in 2024 if he runs again and loses. “I’m not afraid of Donald Trump running again in four years. I’m afraid he’s going to run again and lose, because he can do this again,” said Rep. Ted Lieu (D-CA).

Because the Senate did not hit the threshold of votes needed for conviction, lawmakers will not be able to hold a vote on barring Trump from future federal office. As such, it’s possible he could well run again in 2024.

Trump’s counsel, meanwhile, had few answers about the former president’s actions, and instead tried to argue that this effort was a purely political ploy by Democrats who don’t want to run against him down the line. They stressed, too, that Democrats have used language similar to Trump’s including the word “fight,” while providing no context for their respective remarks or explanation regarding the relevance of their statements.

[Lead defense attorney Bruce] Castor ignored key facts, like Trump’s hours-long delay calling in the National Guard during the attack. His logic was at times incoherent, arguing (for example) that Trump’s disdain for Black Lives Matter protesters meant that he disapproved of violence committed by his own supporters as well. And he seemed to completely misunderstand key parts of the House’s case, like the role of Trump’s behavior in the months prior to the January 6 rally.

Ultimately, many Republicans including Senate Minority Leader Mitch McConnell weren’t able to offer any defense of what Trump did — and justified their votes by citing the Senate’s lack of jurisdiction for the trial.

Because Trump is no longer in office, Republicans have claimed that the Senate does not have purview over his impeachment, since these proceedings have typically been used to remove people from office. As Vox’s Ian Milhiser explained, there’s some debate over that, but most legal scholars disagree and maintain that it is constitutional for the Senate to try a former president.

“Today’s vote is a vote of conscience and I know we will all treat it as such,” McConnell wrote in a letter to Senate Republicans, first obtained by Politico’s Burgess Everett, which explained his decision. “While a close call, I am persuaded that impeachments are a tool primarily of removal, and we therefore lack jurisdiction.” McConnell’s point would have been a moot one, of course, if he had not himself delayed the timing of the trial

Most Republicans agreed with McConnell’s reasoning, although a handful sided with Democrats to demand accountability of the president. The fracture of the Senate conference, while slight, underscores how the GOP could be split moving forward when it comes to a willingness to align itself with Trump.

According to a recent poll from Vox and Data for Progress, there is a similar divide among Republican likely voters — though the majority of the party is solidly behind Trump: 12 percent of Republicans would have backed his conviction, while 82 percent opposed it.

Trump’s support from the Republican base is likely a factor behind some lawmakers’ decisions: If they were to go against him, it’s possible they’ll risk blowback from constituents and a potential primary challenge moving forward. The Vox/DFP poll also found that 56 percent of Republicans were much less likely to vote for a candidate who finds Trump guilty, while 13 percent were somewhat less likely to do so.

As the impeachment trial vote indicates, Trump’s hold on the GOP is still as strong as ever — even though he’s no longer in office.

America’s coronavirus testing failure has forced us to rely more on painful social distancing
Why the trapped Thai soccer team is in increasing trouble: they’re running out of oxygen
The new bill that would create a crime called “abortion murder,” explained
Vox Sentences: The long silence after “I can’t breathe”
Papa John’s founder said it was “a mistake” to resign after he used the n-word
Maxine Waters could be a serious problem for Trump if Democrats win the House