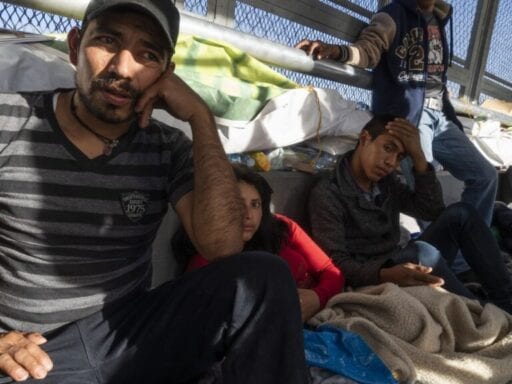 Share
Loading...
Victor Urisa Cabrera from Guatemala came with his daughter, Jaqueline Maria Urisa Reyes for a better life, but has been on the bridge for five days waiting for his asylum meeting on November 4, 2018 in Ciudad Juarez, Mexico | PAUL RATJE/AFP via Getty Images

The rule allows Trump’s asylum agreements in Central America to go into effect.

The Trump administration issued a rule on Monday that would allow it to send migrants seeking protections in the US at the southern border back to Guatemala under an agreement brokered earlier this year.

Former Department of Homeland Security Secretary Kevin McAleenan, who spearheaded the agreement, has billed it as a way to help the country build up its capacity to process migrants seeking protections under both international torture agreements and asylum.

But under the rule issued Monday, the agreement will be used to deport migrants to Guatemala and, eventually, to El Salvador and Honduras, which have signed similar agreements with the US. Hundreds of thousands have fled violence and the lack of economic opportunity in the region, known as Central America’s Northern Triangle, over the past year.

The agreements with the Northern Triangle countries resemble “safe third country agreements” — a rarely used diplomatic tool that requires migrants to seek asylum in the countries they pass through by deeming those countries capable of offering them protection — although the Trump administration has been reluctant to use that term. Until recently, the US had this kind of agreement with just one country: Canada.

The administration has sought such agreements in Central America as a means of achieving President Donald Trump’s goal of driving down the number of migrants seeking refuge at the US southern border by sending them back to the countries they came from and passed through. But immigrant advocates argue that sending migrants back to those countries could have deadly consequences.

How the rule will be implemented

When it goes into effect next month, the joint interim final rule by the Department of Homeland Security and the Department of Justice will establish a new screening process to determine whether the US or Guatemala will process migrants’ claims for protection. It will apply both to immigrants who show up at US ports of entry at the southern border and those who try to enter the country without authorization between ports of entry.

A former administration official familiar with the implementation of the Northern Triangle agreements said that migrants from Honduras and El Salvador who seek protections at the US southern border will be asked whether they sought protections in Guatemala first. If they did not, they would be sent back to Guatemala.

The regulation claims that asylum seekers will only be sent back to countries where they have “access to a full and fair procedure for determining a claim to asylum or equivalent temporary protection.” The administration has certified that Guatemala’s legal framework meets that standard, the official said, but has not evaluated whether Guatemala has the capacity to accept asylum seekers based on, for example, infrastructure or personnel needs.

Initially, the administration will only send relatively low numbers of single adults to Guatemala in order to test out the policy, they said. The United Nations refugee agency, meanwhile, will be working on the ground to bolster Guatemala’s capacity to receive more migrants.

The official said that it is in DHS’s interest to make sure that Guatemala is capable of accepting asylum seekers, particularly in light of anticipated litigation.

The Tahirih Justice Center, which already pledged on Monday to challenge the rule, is one of many immigrant advocacy groups arguing that none of the Northern Triangle countries are able to guarantee “full and fair” immigration proceedings, and that to send asylum seekers back to those countries would violate bedrock human rights principles.

“The rule flatly violates federal law and makes a mockery of our national obligation not to return asylum seekers to violence and persecution,” Richard Calderone, litigation counsel at the Tahirih Justice Center, said in a statement. “And if fully implemented, it will effectively end asylum and related protections in the United States for everyone except unaccompanied children.”

According to the most recently available data from the United Nations, Guatemala had the ninth highest homicide rate worldwide, about 26 deaths per 100,000 inhabitants. The State Department has issued travel warnings for US citizens in all four countries.

The Northern Triangle countries also produce high numbers of people seeking asylum. In 2017, the most recent year for which asylum is available, the US granted asylum to 3,471 migrants from El Salvador, 2,954 from Guatemala, and 2,048 from Honduras.

Trump just made a highly controversial decision about Israel — again
Last week the US wanted to break up Big Tech. Now it’s trying to supersize it.
“That is kindergarten”: Cory Booker says rejoining the Paris climate agreement is not enough
“They’re all Americans”: What Biden gets about the pandemic that Trump doesn’t
Poll: Half of Americans who lost their job during the pandemic still don’t have one
Photos: kids in 123 countries went on strike to protect the climate