This Is Us goes to Vietnam for a poignant, gut-wrenching episode 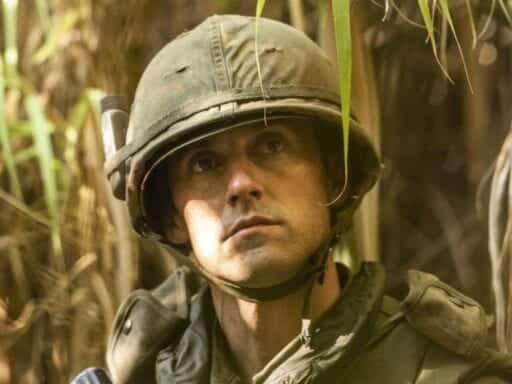 Somehow, this show, of all shows, captures the arbitrary horrors of war.

The worst thing that happened to This Is Us came at the very end of its pilot, when a seemingly simple story about a bunch of people who shared the same birthday ended with a twist.

What seemed like a fairly basic family drama instead revealed its ambitions to encompass the vast history of the particular family at its center, as it slowly became clear that three of the characters were kids born on the same day, raised by the same parents (one adopted), and just happened to share a birthday with their father. The show, it seemed, would take place in two timelines — one in which the kids were grown and living in the present day and the other set in the ‘80s and ‘90s, when the kids were growing up and their parents were still young.

The twist worked. It expanded a good but kinda mawkish pilot into something with larger ambitions. But it also became something the series seemingly felt it had to replicate in future episodes. Where the original This Is Us pilot mentioned that the kids’ dad had died sometime between their teenage years and the present day, the version that aired omitted that detail entirely, saving it for a later episode, where it was deployed as a twist. (The mystery of Jack’s death eventually took over the entire series, to its detriment.)

Sending This Is Us to the Vietnam War could have been so, so terrible. Instead, it worked really well.

“Vietnam,” the third season’s fourth episode, is the first of this particular season to feel like it’s building toward something. Season three’s earlier installments were hampered by many of the show’s established problems — its forced sentimentality, its weird insistence on upholding traditional gender roles, its inability to let any moment play naturally when it could lard on the music and the tears. In particular, the flash-forwards to the future (yes the show now contains a future timeline) and a mysterious “her” have taken the series’ penchant for mystery to laughable degrees.

“Vietnam” is different. Believe me, I was skeptical that This Is Us could possibly do anything with the Vietnam War that didn’t feel derivative of millions of war movies before it — much less do anything non-derivative within the standards of broadcast television. And for roughly the first half of the hour, it felt a little like series creator Dan Fogelman and acclaimed author Tim O’Brien (whose short story collection The Things They Carried is one of our most essential pieces of fiction on Vietnam) couldn’t crack this particular riddle in the script they co-wrote, settling for structural trickery at the expense of anything meaningful.

The part of the episode that’s actually set in Vietnam is fine, especially for a broadcast TV show. We know that Vietnam vet Jack (Milo Ventimiglia, the only series regular to appear in the entire hour) lost his younger brother Nick (Michael Angarano) in the war, and we know that the relationship between the two of them was a darkly codependent one, thanks to how often Jack had to protect Nick from their abusive father as boys.

Now, if you’ve ever seen a movie set during the conflict, none of the Vietnam-set story will be new — the brotherhood among soldiers, the slowly deflating morale, the men hollowed out by conflict, etc., etc., etc. It’s all been done much, much better elsewhere, and this episode loses a little something from forcing viewers to read between the lines, to fill in the gaps with other Vietnam stories they’ve read or seen. (Ken Olin’s direction is sharp, however, helping viewers fill in those gaps with clear, motivated camerawork.)

But what we’re watching for here isn’t the Vietnam stuff, not really. The episode begins with Jack finally encountering Nick in Vietnam for the first time; it shows us that the two brothers are emotionally ruined in very different ways, and then it begins skipping backward in time. It feels like a gimmick, like This Is Us is jumping around in time just to do it. But Fogelman and O’Brien have a destination in mind for this particular story.

In the end, the reason that “Vietnam” seems to rely so heavily on viewers’ knowledge of other Vietnam-set stories — and their knowledge that Nick will lose his life in the war — is that it knows its options to depict the war in an honest fashion will run headlong into the standards and practices of broadcast television. The episode is using the war as its foundational tragedy, so that once the story moves backward in time past the war, the episode can ruminate on the sheer, horrible coincidence of any human life.

This second half of the episode, set in the United States, reveals not just that Jack tried to save Nick from going to Vietnam at all by helping him dodge the draft in Canada, but also that the date of Nick’s birth — October 18, 1948 (exactly 70 years before the episode first aired) — was the date of his birth by just two minutes.

He was born at 11:58pm — and because that meant he was born on the 18th instead of the 19th, he was drafted. He went to Vietnam. He died there. Two minutes make up the gap between a Nick who perhaps avoided the war entirely and one who was consumed by it.

And Fogelman and O’Brien save their most chilling image for last — a room full of baby boys, who all share the same birthday as Nick, not knowing that horror and death are in their future. All thanks to a pointless war that became a bloody mess, a government that failed to see them as anything other than numbers, and an accident of timing.

This Is Us occasionally indulges in the idea that little accidents of timing and fate are just as likely to lead to tragedy as to something warmer. After all, this is the show that spent an entire heart-rending musical montage on a Crock-Pot setting a house on fire.

More typically, however, the show uses its twists to talk about the unlikely coincidences that make our lives better — the old “And that’s how I met your mother” gambit. This makes sense within the show’s vision of the world, where its characters struggle with emotional repression and are gently encouraged to release their tears (whether happy or sad) by recalling those moments when fate twisted exactly the right way to allow for them to exist.

But “Vietnam,” like a handful of other This Is Us episodes, is interested in the idea that we sometimes have incredibly little control over our own fate, that being born two minutes before midnight might lead to a lifetime of gutted sorrow. None of us have any say in our births, but sometimes, the simple fact of when they happen makes us complicit in great horrors or marks us for great tragedies, all thanks to accidents of history.

Fogelman and O’Brien put some of these ideas directly in Nick’s mouth as he and Jack embark on a trip together, one that will culminate in Jack helping Nick escape the country and run to Canada. (Obviously, Nick ultimately decides against this course of action.) If only, Nick says, he could see his life play out backward, could understand how the things that make up who he is came to be.

It’s clunky and unnecessary dialogue — we’d understand the notion without the show explicitly saying it — but the concluding moments, that shot of a room full of baby boys, give it power anyway. After all, if we really could trace our lives backward, we’d all eventually find ourselves back in a bassinet, howling our lungs out, unaware of just how much our fate would be dictated by the circumstances of our birth, a lesson that every day moving forward will underline and mark in bold yellow highlighter.

There’s a danger in telling schematic stories like the ones This Is Us tells, because they run the risk of reducing their characters and those characters’ actions (as well as, by extension, all of us and our actions) into helpless wards of the plot, shuffled from event to event without any sort of agency or moral reckoning. And yet in the show’s best hours, like “Vietnam” or season one’s “Memphis,” This Is Us finds a way to tell schematic stories in a way that underlines how easy it can be to get sucked beneath the water by history’s never-ending undertow.

Still, the series remains honest about these accidents of timing. They’re not everything. Would Nick have been okay if he had been born two minutes later? It’s tempting to say yes, but “Vietnam” also emphasizes a paternal line filled with rage, abusive behavior, and alcoholism. Even if Jack wasn’t abusive to his wife or kids (so far as we know), he certainly struggled with rage and with drinking. And on it goes.

This Is Us’s odd, pointillist structure, in which each new episode adds another dot to an enormous picture meant to represent something — about this family, or about America, or whatever — often feels more complicated and clever than it’s worth. But every so often, the show comes up with an episode like “Vietnam” and an image like that of a room full of babies, none of whom asked to be born, none of whom will later ask to die, but all of whom will be required to do both.

This Is Us airs Tuesdays at 9 pm Eastern on NBC. Previous episodes are available on Hulu.

Dominance and reputation: How Trump thinks about Iran
The public doesn’t trust GMOs. Will it trust CRISPR?
Iran is stockpiling uranium it could use to make a nuclear bomb. But don’t panic just yet.
No, the Regeneron drug Trump received is not a Covid-19 “cure”
Why Corey Lewandowski is testifying about the Mueller report
Conservative media is setting the stage for delegitimizing a Biden victory