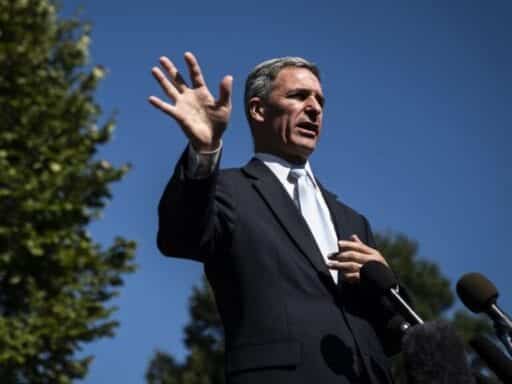 Share
Loading...
Ken Cuccinelli, acting director of US Citizenship and Immigration Services, speaks to reporters and members of the media outside the West Wing at the White House on September 27, 2019. | Jabin Botsford/Washington Post/Getty Images

He would be second-in-command to Chad Wolf, the new acting DHS secretary.

The Trump administration is planning to install acting US Citizenship and Immigration Services Director Ken Cuccinelli, who has become the public face of the president’s immigration policies, in a key position at the Department of Homeland Security after rejecting him for the top job at the agency.

The report comes after weeks of deliberation and confusion over who would replace former acting DHS Secretary Kevin McAleenan, who announced his resignation last month.

President Donald Trump had reportedly wanted to tap Cuccinelli, a move that would give the president an acting secretary who appears to agree with him on both style and substance. Cuccinelli has become the de facto spokesperson for Trump’s immigration policy, even when it technically goes beyond his job description. But under the law governing how federal vacancies are filled, Cuccinelli wasn’t eligible to be appointed.

Trump instead decided to pick Chad Wolf, a former top aide to DHS Secretary Kirstjen Nielsen. On Wednesday, Wolf was confirmed by a vote of 54-41 as the undersecretary for the Office of Strategy, Policy, and Plans at DHS and then swiftly sworn in as the new acting DHS secretary.

But it appears Trump will still try to get Cuccinelli into a powerful position after all. As first reported by CNN, Wolf is expected to appoint Cuccinelli as acting deputy DHS secretary, the second-most senior position in the agency.

There will likely be legal challenges to the legitimacy of Wolf’s appointment and Cuccinelli’s expected promotion, Rebecca Jones, policy counsel at the Project on Government Oversight, said. To appoint Wolf as acting secretary, she said that McAleenan would have likely had to rearrange the line of succession at DHS, but it’s not clear that he had the power to do so since he was not Senate-confirmed.

But if the plan works, it will elevate Cuccinelli as a voice for Trump’s immigration policies, which he has already defended in regular talk show appearances. Most infamously, he proposed an amendment to Emma Lazarus’s famous poem on the Statue of Liberty in an interview with NPR: “Give me your tired and your poor who can stand on their own two feet.” Taking cues from Trump, he also tweets prolifically, lambasting the “radical left” and reporters he accuses of misquoting him.

Trump’s legal advisers reportedly told him that appointing Cuccinelli as acting DHS secretary would likely run afoul of the Federal Vacancies Reform Act of 1998 (FVRA), which establishes requirements for an official to be able to serve in an acting capacity.

The law allows the president to fill a vacancy temporarily with anyone who is the “first assistant” to the open position, holds a Senate-confirmed position in the administration, or has served in the same agency as the open position for a minimum of 90 days prior to the opening of the vacancy, regardless of whether they have been confirmed by the Senate.

Cuccinelli fell into none of those categories, legal experts have argued: He is not second in command at DHS, he has not been confirmed by the Senate in his role at USCIS, and he was not a senior DHS employee for the 90 days before former DHS Secretary Kirstjen Nielsen, the last person to hold the position on a permanent basis, stepped down on April 10.

Trump has said that he prefers to appoint acting officials at executive agencies like DHS because it gives him more flexibility. But in Cuccinelli’s case, it might also be to evade confirmation hearings in the Republican-led Senate, where he has made powerful enemies.

Senate Majority Leader Mitch McConnell told reporters in April that he had urged Trump not to nominate Cuccinelli as acting DHS secretary after Nielsen stepped down. (Cuccinelli previously used to lead the Senate Conservatives Fund, a group that fundraised to unseat incumbent Republican senators, including McConnell.)