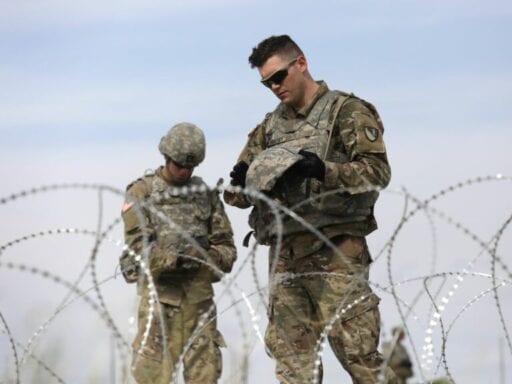 And it seems like he’d ask them to do it, too — if it weren’t for those pesky laws.

President Donald Trump has mused about closing down the US-Mexico border entirely. He’s reportedly talked about restarting the family separation policy (which he denies). And now, Trump has added another line to his stop-immigration-at-all-costs rhetoric.

The president is saddened by the fact that the military can’t be more “rough” with migrants coming to America.

After telling reporters in Texas on Wednesday that he wants more troops at the US-Mexico border, the president added, “our military, don’t forget, can’t act like a military would act. Because if they got a little rough, everybody would go crazy.”

The reason? “They have all these horrible laws that the Democrats won’t change [and] they will not change them,” the president said, without explaining what laws he means, or how his political opponents thwarted him.

It’s easy to dismiss this as another off-the-cuff, tough-guy Trump comment. But one can’t lose sight that this is the commander in chief — the head of all American forces — saying he kind of wishes the military could have more freedom to hurt men, women, and children.

That, to put it mildly, is horrifying.

The military can’t do what Trump wishes it could. That’s a good thing.

It’s unclear what laws the president was referencing when he spoke to reporters, but we do know that there are laws in place to ensure a president doesn’t use the US troops the way Trump clearly wants to.

Here’s the big one: The US military is barred from using its capabilities directly to enforce US domestic laws — including immigration laws — unless Congress specifically authorizes it to do so. This stipulation, known as “posse comitatus,” is why US troops can only support US border agents, but not take direct action themselves.

When Trump sent 5,000 troops to the border last year, Gen. Terrence O’Shaughnessy, the head of military command overseeing North American operations, said the military will conduct all of its operations at the border “in adherence to posse comitatus.”

The reason this law exists, and the military follows it, is simple: The president shouldn’t use the military for his own personal reasons to “execute the law” at home.

The military is mainly designed to fight foreign adversaries — and unarmed families looking for a better life in the US don’t come close to counting as enemies. This is why military leaders are typically clear about how they would disobey an illegal order, even if it comes from the president.

And, of course, you don’t want a military that’s wiling to do just anything the president asks, otherwise it becomes his own personal, heavily armed, well-trained police force. That’s about as undemocratic and un-freedom-y as it gets.

After I sent the full Trump quote to the Pentagon, a spokesperson simply wrote back: “Border security is a critical element of our national security. DOD is committed to supporting CBP’s border security mission with the right capabilities at the right locations.”

That’s promising. Still, that doesn’t take away Trump’s own comments which were wrongheaded, cruel — and downright scary.

Trump berates Democrats as he begs for their votes on immigration bill
Midsommar has a deeply trans narrative hiding in plain sight
Taylor Swift used to be apolitical. Now she’s slamming Trump on Twitter.
Competitive video gaming has become a global phenomenon
Trump still wants to get rid of the Affordable Care Act, even as Covid-19 rages
Threats, misogyny, hypocrisy — Trump’s post-impeachment speech had a little of everything