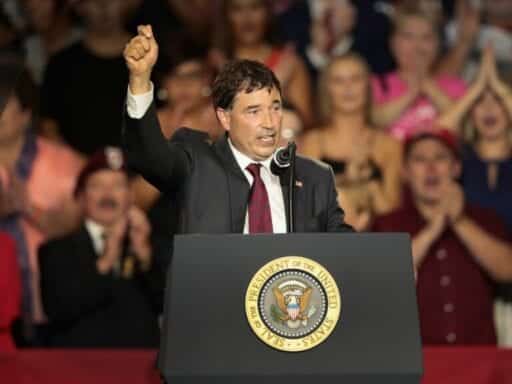 He tweeted about the Ohio race after stumping there this past weekend.

Tuesday’s special election in Ohio’s 12th District could be a pivotal win for Democrats — and President Trump is trying to ensure that doesn’t happen.

In addition to stumping for Republican candidate Troy Balderson at a rally last week, Trump endorsed him on Twitter on Tuesday morning.

Ohio, vote today for Troy Balderson for Congress. His opponent, controlled by Nancy Pelosi, is weak on Crime, the Border, Military, Vets, your 2nd Amendment – and will end your Tax Cuts. Troy will be a great Congressman. #MAGA

Trump went on to retweet another post from his son Eric Trump that offered additional backing of Balderson’s candidacy.

This special election — which many see as reminiscent of the race featuring Conor Lamb’s surprise win in Pennsylvania earlier this year — could serve as another key bellwether of a “blue wave” ahead of the midterms this fall. Lamb pulled off a seismic upset in Pennsylvania’s 18th Congressional District earlier this spring, taking a district that Trump captured by more than 20 percentage points in 2016.

Republicans are desperate to make sure there is no such repeat on Tuesday. Ohio’s 12th voted for the president by more than 11 points in 2016, and it’s rated as a toss-up by Cook Political Report.

As Cook House editor David Wasserman writes, the district is less Republican than Pennsylvania’s 18th in myriad ways and is widely considered “Kasich Country” despite its 2016 support for Trump. What’s more, recent polls put the two candidates within striking distance of each other, suggesting that O’Connor has a real shot of flipping the district.

Trump, along with Vice President Mike Pence, have thrown their weight wholeheartedly behind Balderson in an effort to secure what would be an important symbolic victory for Republicans before the November elections. A bevy of conservative groups have also sunk millions into blanketing the district with advertising leading up to the race.

Their collective efforts are about much more than Balderson’s candidacy. They’re focused not only on winning this seat but also sending an important message about the dominance of the GOP before voters head to the polls in November.

The firing of SDNY US Attorney Geoffrey Berman, explained
Trump campaign attack on Kamala Harris’s citizenship is right out of the birtherism playbook
Republican: FBI distorted witness reports in Clinton and Russia probes
China may double its nuclear arsenal in just 10 years. Don’t panic.
Court documents provide new details about alleged Russian spy Maria Butina
All the ways Medicaid is on the ballot in 2018