Trump released a tweet-like statement denouncing violence. He still needs to do more. 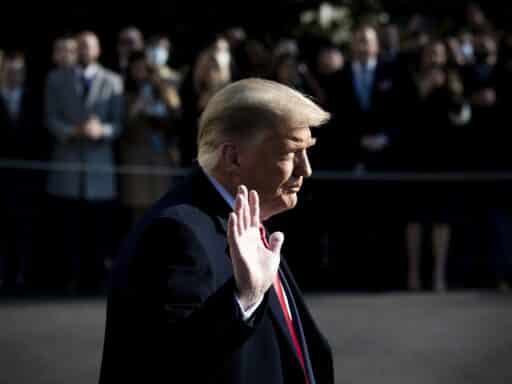 He’s trying to “both sides” the threat his supporters present to the peaceful transfer of power.

President Donald Trump released a statement trying to dissuade his supporters from further acts of violence as the House on Wednesday debated impeaching him for what would be an unprecedented second time following a riot he encouraged at the Capitol last week that left five dead.

Trump’s statement read remarkably like a tweet, even though he was banned from Twitter last Friday for posts the company described as potentially providing “encouragement to those potentially considering violent acts.”

“In light of reports of more demonstrations, I urge that there must be NO violence, NO lawbreaking and NO vandalism of any kind,” it said. “That is not what I stand for, and it is not what America stands for. I call on ALL Americans to help ease tensions and calm tempers. Thank You.”

Trump’s unequivocal denunciation is a departure from his tone last Wednesday, when in one of his final tweets he offered an apologia for rioters, describing their actions as a thing that “happen[s] when a sacred landslide election victory is so unceremoniously & viciously stripped away from great patriots who have ben badly & unfairly treated for so long.”

But it’s worth noting two respects in which the president’s latest statement still falls short.

First, Trump’s call for “ALL Americans to help ease tensions and calm tempers” suggests that Democrats share in the guilt for the fact National Guard troops are stationed at the Capitol to protect it from Trump supporters, when in reality they’ve done nothing to incite Trump supporters beyond debunking the lies the president and other Republicans spent months pushing about the “stolen election.”

So Trump should really just be addressing his own supporters. But the false notion that “both sides” are guilty in the Capitol rioting was also a theme of many of the speeches delivered by House Republicans during the impeachment debate.

Second, Trump’s statement doesn’t denounce the aforementioned lies about the election — ones that motivated the rioters who ransacked the Capitol last week in hopes of stopping “the steal.” In fact, while Trump has generically denounced violence a number of times since last week’s riot, he hasn’t once acknowledged the truth that Biden legitimately and decisively won the election. Debunking these lies about his defeat being the product of fraud might not be something Trump is psychologically capable of, but it would do more than anything else he could say to calm tensions.

Trump’s statement, which was released to Fox News, came following Tuesday remarks in which he may have harmed his cause by absurdly calling the incendiary speech he made just before last week’s riot as “totally appropriate.” He then gave a speech that said it was in fact Biden who should be worried about removal from office.

“The 25th Amendment is of zero risk to me, but will come back to haunt Joe Biden and the Biden administration,” he said, alluding to another way in which he could be removed from office. “As the expression goes, be careful what you wish for.”

It’s genuinely good that Trump now appears to be trying to turn down the temperature, but there’s much more he could do in hopes of ensuring that the transition of power to President-elect Biden takes place without another eruption of violence.

How a star orbiting a supermassive black hole proves Einstein is (still) right about gravity
A simpler, more useful way to tax carbon
A brief history of the British tabloids and the Royal Family
How to watch the House’s historic impeachment vote
The pandemic has been great for Netflix
Many world leaders have held national coronavirus memorials for the dead. Trump hasn’t.