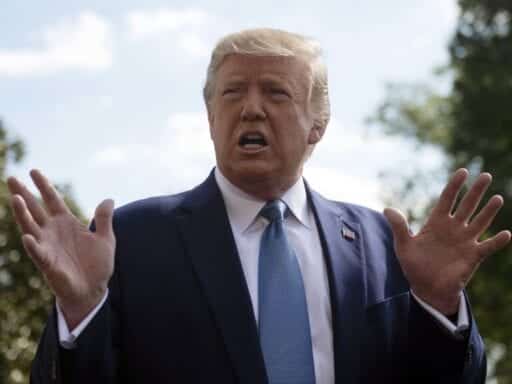 Share
Loading...
President Donald Trump speaks to the press as he departs the White House in Washington, DC, for his annual visit to Walter Reed National Military Medical Center, on October 4, 2019 | ANDREW CABALLERO-REYNOLDS/AFP via Getty Images

Trump signed an executive order on October 3 to “protect and improve” Medicare with a series of somewhat vague proposals that are aimed at expanding a more market-based approach to Medicare.

There are some provisions in this executive order that are largely uncontroversial, like improving network adequacy, expanding access to tele-health, or reducing the time between drugs being approved by the FDA and their being covered by Medicare.

But the Trump administration’s explicit intent to promote Medicare Advantage, a program that allows Medicare enrollees to opt into private qualified plans, could have major implications for the current Medicare system. The order is a bit of a “Rorschach test,” said Kaiser Family Foundation Medicare expert Tricia Neuman, one with many possibly interpretations.

“The biggest implication is that despite the phrasing that this is designed to protect and improve Medicare, to the extent there are improvements they are all focused on the private Medicare Advantage plans that are by most measures overpaid compared to normal Medicare,” Paul Van de Water of the liberal think tank Center on Budget and Policy Priorities said of the plan. “The Executive Order continues to privilege the Medicare Advantage plans and make some proposals that could disadvantage two-thirds of the Medicare enrollees.”

It also should be noted that Trump’s 2020 budget included cuts to Medicare to the tune of $575 billion. As Vox explained, the administration said it would achieve these cost reductions by targeting wasteful spending, provider payments, and lowering prescription drug costs.

Since the 1970s, Americans in Medicare have, through Medicare Advantage, been able to enroll in private health plans — both HMOs and PPOs — instead of the traditional Medicare program. Currently, roughly a third of Medicare enrollees, or 22 million Americans, are on some kind of private plan. Enrollment in Medicare Advantage has nearly doubled over the last decade and the program has played a significant part in expanding private insurance’s role in Medicare. The Trump administration is clear that it sees that trajectory positively.

“The executive order commissions us to examine all practices, regulations and guidance to just make sure that we are not steering people into fee-for-service as opposed to giving them a genuine choice of Medicare Advantage or fee-for-service,” HHS Secretary Alex Azar told reporters.

Trump’s executive order calls for federal agencies to ensure that traditional “Medicare is not advantaged or promoted over [Medicare Advantage] with respect to its administration.” Notably, experts like Neuman argue the problem is really the other way around: Traditional Medicare doesn’t get much attention compared to Medicare Advantage. And it’s not exactly clear how the administration plans to do this.

The order also repeatedly calls for a “transition toward true market-based pricing in the [fee-for-service] Medicare program.” In another instance the order calls for “Medicare FFS payments to more closely reflect the prices paid for services in [Medicare Advantage] and the commercial insurance market, to encourage more robust price competition, and otherwise to inject market pricing into Medicare FFS reimbursement.”

These provisions could be particularly consequential. For one, traditional Medicare and Medicare Advantage have roughly comparable payment rates whereas commercial insurance pays at a much higher rate. The most extreme interpretation of this proposal would mean that the cost of Medicare would balloon.

“An increase in Medicare payment rates would put an enormous pressure on the Medicare trust fund, which would create a real problem for financing care for future generations. Increasing rates would also increase premiums,” Neuman said.

But if matching Medicare and commercial rates is not actually what the administration meant, then the impact would be relatively minimal. There are select services that traditional Medicare pays a higher rate than Medicare Advantage or even a commercial insurance, like the cost of a walker, which could be an opening for savings.

Another provision calls to “preserve the Social Security retirement insurance benefits of seniors who choose not to receive benefits under Medicare Part A.” Medicare Part A is an entitlement, as affirmed by a 2012 court decision in which then-DC Circuit Court Judge Brett Kavanaugh ruled that there is “no statutory avenue for those who are 65 or older and receiving Social Security benefits to disclaim their legal entitlement to Medicare Part A benefits.” It is possible that the administration is trying to open the door to allowing seniors to opt out of Medicare entitlements, which would fundamentally alter the Medicare risk pool.

Despite this, Advantage plans have been seen as a win-win for many. For seniors, the Advantage plans are allowed to offer more benefits than traditional Medicare does, like hearing, dental, and vision, and the premiums are typically lower than having to buy supplemental coverage for traditional Medicare. Insurers also like it because they’ve been profitable. This profitability has been managed in part because Advantage plans usually restrict the network of health care providers and have healthier enrollees — but they also have been found to engage in some fraudulent practices to inflate the payments from the government, like claiming enrollees are sicker than they actually are.

Proponents for single-payer health care, like Sens. Bernie Sanders and Elizabeth Warren, often point to these instances of misconduct in making a case for essentially eliminating private insurance.

Ironically, the Trump administration’s argument against single-payer echoes one of Medicare-for-all proponents’ biggest talking points: that Medicare is super popular.

Federal judge blocks a Texas order limiting ballot drop-off locations
Trump may soon ban Russian spy flights over US military bases. That’s a bad thing.
Why a negative Covid-19 test before Thanksgiving isn’t an all clear
How Christmas trees are made, explained by a tree farmer
Jeff Sessions announces a Senate run — by telling voters he’s still loyal to Trump
The “Green wave” and 4 other takeaways from the European parliamentary elections