Trump walked (briefly) in front of the queen, and apparently that’s not allowed 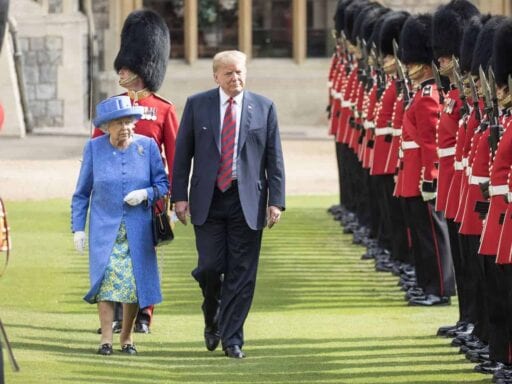 Of course Trump didn’t get his royal visit completely right.

President Donald Trump may have just given the Brits one more reason to dislike him: He committed a faux pas during his visit with the queen.

Footage of Trump walking in front of Queen Elizabeth II as they inspected her honor guard on Friday swept across the internet over the weekend. The ordeal, which lasted for a matter of seconds, merely looks awkward to the unknowing eye. But it’s apparently a no-no in British royal protocol.

When the pair starts walking, the queen gestures to Trump, apparently trying to direct him where to go. He walks ahead of her, as she tries to move behind him and to his other side. Trump stops, seeming to realize he’s lost her, and she returns to where she was in the first place.

Britain’s Queen Elizabeth walks around US President Donald Trump as they inspect the guard at Windsor Castle pic.twitter.com/2DWfIlTeMT

As Slate notes, the BBC’s list of dos and don’ts for meeting the queen states that people should never turn their back to the queen, as it is considered rude. Twitter noticed Trump’s slip-up, too.

I’m no royalty expert, but I’m confident cutting the Queen off is frowned upon pic.twitter.com/c2KSkUn145

Me: I am ambivalent towards the monarchy.

[Trump walks slightly ahead of the Queen]

Me: Hang the treasonous commoner does he not know that glorious woman was CHOSEN BY GOD!?

I am reminded of what my blue-collar dad used to tell us kids: Money can’t buy class. https://t.co/tQh1y7FX86

Trump’s UK trip probably hasn’t been his most fun

Some people also criticized Trump and First Lady Melania Trump for shaking hands with the queen when greeting her instead of bowing or curtseying, which is customary. But the BBC says it’s allowed to shake her hand or, if you really want, do some combination of two or three.

Trump was also reportedly a bit late to his meeting, although that is in dispute.

For all those asking, no, Trump did not keep the Queen waiting. He was due at 5pm and the motorcade drove into the Quadrangle at 4.59pm.

A spokeswoman for Melania Trump told the New York Times that the first lady was briefed on royal protocol before the visit. It’s not known whether Trump also got the memo. He is famously averse to briefing books.

Trump’s visit to the United Kingdom was met with protesters this week. Thousands of people took to the streets on Friday in London to speak out against the US president, and a giant “Trump baby” balloon floated above the city. Protesters also gathered outside of Trump’s Turnberry golf resort in Scotland on Saturday and chanted at him as he golfed.

#BREAKING President Donald Trump waving a protestors who are calling him racist as he plays golf at #Turnberry @realDonaldTrump #TrumpProtests #TrumpVisitsUK #trump pic.twitter.com/aZFmqFzkzX

Trump isn by no means the only US official to be accused of making a mistake in his interactions with the queen. First Lady Michelle Obama put her arm around the queen in 2009, and the queen reciprocated the embrace. You’re not supposed to touch the queen.

Hurricane Laura rapidly intensified and could hit the Gulf Coast as a Category 4 storm
Proof that Americans are lying about their sexual desires
Brexit: The UK is finally leaving the European Union
Supreme Court says American Express contract with merchants does not stifle credit card competition
Chart: How coronavirus is devastating the restaurant business
Stephen Miller's D.C. home a target of immigration policy protest