Trump wants Putin to visit Washington, DC, in the fall 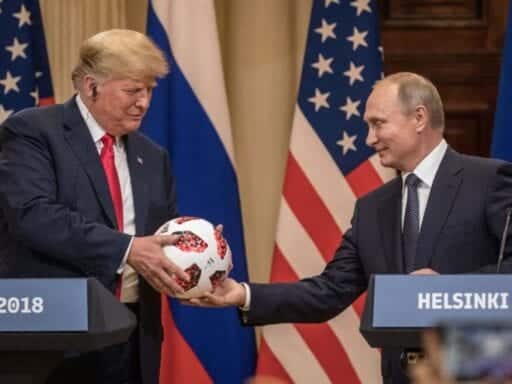 Days after US President Donald Trump sparked bipartisan outrage for how he handled his meeting with Russian President Vladimir Putin in Finland, Trump has decided to do it all over again in Washington, DC.

On Thursday, White House press secretary Sarah Sanders tweeted that Trump had asked National Security Adviser John Bolton to invite Putin to visit Washington in the fall. She also noted that both countries’ security council staff members were in contact.

This invitation seems to be a sign that Trump is keeping to his goal to get along with Russia and work closely with Putin on — well, something that has yet to be clarified.

In Helsinki, @POTUS agreed to ongoing working level dialogue between the two security council staffs. President Trump asked @Ambjohnbolton to invite President Putin to Washington in the fall and those discussions are already underway.

Trump and Putin met alone, with just translators, for close to two hours in Helsinki before their press conference on Monday, but what the two leaders accomplished in their discussions is still murky.

Trump mentioned the possibility of another sit-down with Putin in a pair of his own Thursday morning tweets, saying he looked forward “to our second meeting so that we can start implementing some of the many things discussed, including stopping terrorism, security for Israel, nuclear … proliferation, cyber attacks, trade, Ukraine, Middle East peace, North Korea and more.”

The Summit with Russia was a great success, except with the real enemy of the people, the Fake News Media. I look forward to our second meeting so that we can start implementing some of the many things discussed, including stopping terrorism, security for Israel, nuclear……..

….proliferation, cyber attacks, trade, Ukraine, Middle East peace, North Korea and more. There are many answers, some easy and some hard, to these problems…but they can ALL be solved!

“There are many answers, some easy and some hard, to these problems…but they can ALL be solved!” Trump concluded.

Trump told CBS’s Jeff Glor that he and Putin achieved progress on nuclear proliferation, “protection of Israel,” and help on North Korea, but failed to provide specifics. Glor specifically pressed Trump on North Korea, and Trump responded by talking about Russia and North Korea’s shared border.

Now, Trump’s invitation to Putin to visit Washington will likely intensify the furious speculation as to why Trump is so deferential to the Russian leader, especially as special counsel Robert Mueller’s investigation into possible links between Trump aides and the Kremlin continues.

Despite the fact that evidence is steadily piling up that Russia interfered in the 2016 US presidential election — and is still targeting the US — Trump still seems less than convinced.

The US president has gone back and forth over the past few days. At the press conference in Helsinki, he appeared to take Putin’s word over that of his US intelligence officials about whether he thought Russia meddled in the US election. Then, a day later, he claimed that he misspoke.

Trump is now trying to make the case that he’s always believed Russia meddled, but he often adds a caveat — that it might also be other people, too. But he continues to attack the Mueller investigation as a “witch hunt,” which works to discredit the probe’s findings even when it comes to Russian hacking and cyberattacks.

What makes all of this stranger still is that Trump himself was briefed before his inauguration on persuasive evidence, including texts and emails from a Russian military officer that Russia attempted to influence the 2016 presidential race, the New York Times reported on Wednesday.

Dan Coats, Trump’s director of national intelligence, put out a statement after Trump’s Helsinki press conference reiterating Russia’s role in attacking US elections. And on Thursday, during an interview at the Aspen Security Forum, Coats said he didn’t think it was a good idea for Trump to meet Putin in Finland alone.

But now the president has apparently extended an invitation to the Russian leader to visit him on his home turf — and it’s anyone’s guess what will happen this time around.

The FBI released records on Carter Page surveillance. It thought he was being recruited by Russia.
Protesters demand justice after police officers aren’t charged with killing Breonna Taylor
How baby clothes became a pink and blue battleground
Congress passes bill to avert another government shutdown — for now
Mali’s president was elected after a coup. Another coup just removed him from power.
Do you really have to wash your mask after every use? Short answer: Yes.