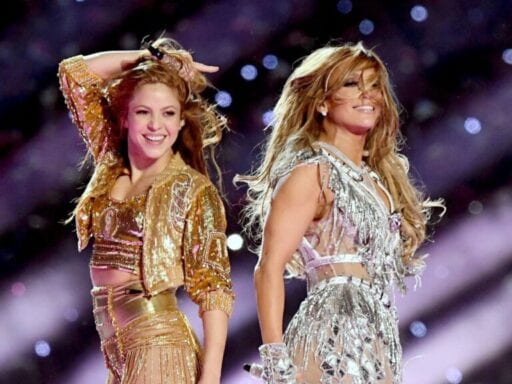 J.Lo and Shakira turned Super Bowl 2020 into their playground.

Considering the NFL’s contentious relationship with stars like Rihanna and Cardi B — both Rihanna and Cardi, along with other musicians, have said they won’t perform for the league because of its treatment of Colin Kaepernick — it’s something of a marvel that the 2020 Super Bowl halftime show boasted kinetic talent in the form of superstars Jennifer Lopez and Shakira (especially compared to Maroon 5, who headlined the halftime show in 2019). The call to book the duo was facilitated by Jay-Z, through his still relatively new partnership with the NFL.

Lopez’s appearance was especially timely in light of her recent turn as the glamorous underdog Ramona in Hustlers. Her performance as a stripper who just wanted to get even had a metaphysical edge to it as Lopez, herself an underdog as an actress and a musician, finally got the credit she’s been fighting for her entire career.

And like she did in Hustlers, Lopez — with ample help from Shakira — slunk away with the entire thing.

The two delivered a joyous halftime show at the Hard Rock Stadium in Miami, bringing energy to a gig that frequently runs the risk of coming off as snoozy and being drowned out by the cavernous arena and occasion. The show combined both singers’ best and beloved hits with indomitable hip-shaking and, hair-flipping, and some weirdly wonderful entertainment.

Shakira, decked in fiery red, opened the show howling to her languid hit “She Wolf,” before somehow manifesting a guitar and whipping her crimson mane. I do not pretend to understand the world Shakira lives in, some kind of eerie space where there’s always a guitar to play, ropes to pantomime bondage with, and a beat to wiggle to, but if caffeinated enough, I have no doubts I could have fun there.

Like it was ever in doubt, Shakira then performed her hit tune “Hips Don’t Lie,” accompanied by said truth-telling hips.

It’s curious, though, that 2020 marks the 16th year since Janet Jackson’s 2004 performance with Justin Timberlake and the infamous “wardrobe malfunction” that almost killed Jackson’s career. (Jackson was burdened with the blame and was blackballed for exposing a breast.) A decade and a half later, Shakira showed how much times have changed. She was clearly in charge of her sexuality onstage and emboldened by her own agency, with few dudes to speak of among her backup dancers. (Though Puerto Rican artist Bad Bunny accompanied Shakira for a song.) That feels a little like growth.

Lopez’s “Jenny From the Block” marked the handoff from Shakira. And what a delicious transition it was.

Lopez, clad in silver and shining like a glamorous disco ball, descended from a lit pole not unlike the ones seen in Hustlers. Despite the film’s critical acclaim, Lopez was ultimately snubbed by the film academy and didn’t receive an Oscar nomination for her performance. So even though she had been planning to draw on her movie moves and lean into her pop culture moment for some time (the announcement of Lopez and Shakira as Super Bowl halftime performers came out in September), the halftime show felt like a reminder to Oscar voters of what a mistake they made.

Lopez, sliding to her knees at one point and performing a cheerleader-like pyramid stunt in heels, hit every beat while singing her biggest hits, including “Waiting for Tonight,” “Love Don’t Cost a Thing,” and “Let’s Get Loud.” Each hip pop, hair flip, and stomp elicited more and more energy from the crowd before she joined with Shakira for one final bum-shaking sendoff.

And in that moment, the football game between the San Francisco Giants and the Kansas City Chiefs became a footnote in a bigger story, a stark reminder that it’s been J Lo.’s year and we’ve all just been lucky to witness it.

Israeli Prime Minister Benjamin Netanyahu has been indicted on corruption charges
The year of bad posts
Trump’s Minneapolis rally was a window into how ugly his 2020 campaign will be
North Carolina’s all-important 2020 Senate race, explained
The second act of Jeff Bezos could be as big as his first
Joe Biden ousts the man who tried to reshape US global media