We’ve been talking about a national grid for years. It might be time to do it. 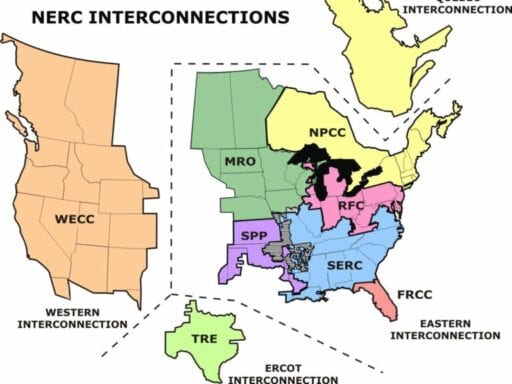 A massive new study confirms a national energy grid would pay for itself.

The US does not have a national energy grid.

Instead, functionally speaking, it has three grids: the Eastern Interconnection, ERCOT (a Texas grid, basically), and the Western Interconnection. Though there are a few small ties between them, very little energy is exchanged. They mostly operate in isolation.

This doesn’t make sense. If there is one thing almost every climate or clean-energy analyst agrees on, it’s that, when it comes to grids, bigger is better. Sharing energy over a wider geographic area improves efficiency, smooths out peaks and troughs in demand, reduces the use of duplicative backup resources, allows for the integration of more renewable energy, and reduces power prices.

Virtually every scenario that has the US hitting ambitious decarbonization goals involves a massive build-out of transmission to eventually create a national grid.

The virtues of grid expansion apply on every level. Even within the three big grids, coordination and interconnection could certainly be improved. (California is currently deciding whether to link up with a larger Western energy market, in part due to the lure of savings from operating a bigger grid.)

But those virtues especially apply at the national level. If there was any doubt about that, it has been put to rest by the release of a massive new study from the National Renewable Energy Laboratory (NREL).

It examined the costs and benefits of linking up America’s three big grids into a single, functional national grid.

A national grid has been discussed for years, but it might finally be time

Of course, a national grid is an obviously good idea, which is why people have been talking about doing it for decades. Seams cites national-grid studies going all the way back to 1923. Here’s a Federal Power Commission study from 1967 (not long after the November 1965 blackout) that recommends greater coordination of bulk power resources over a larger area. Here’s 2002 Department of Energy study “to examine the benefits of establishing a national electricity transmission grid and to identify transmission bottlenecks and measures to address them.”

So why believe it might actually happen this time? What’s changed?

Well, the grid has gotten more vulnerable to weather, which itself is getting weirder, with more heat waves, and more extreme events.

New technologies have commercialized — both solar and wind power, which increase the grid’s need for flexibility and size, and high-voltage transmission lines, which are capable of providing flexibility by carrying power over large distances.

Alongside that, computing power has advanced in leaps and bounds, seeing rapid recent advances in artificial intelligence and parallel computing. “Exa-scale computing” means that “100,000 node transmission models can be simulated for an entire year, in a single day,” the researchers wrote. Put more simply, researchers are now able to model transmission proposals with a level of detail and granularity that was unthinkable even a few years ago.

Plus, the imperative to decarbonize the electricity system has made the challenge of accommodating more renewable energy more pressing. So regional grid operators and utilities are talking more about the need to coordinate. There are many available partners in the effort, as Seams shows.

In short, it might finally be time to finally do this thing. (Hope springs eternal!)

So, NREL ran modeling on four different plans for a national transmission system and assessed their costs and benefits from the period of 2023 to 2038.

The first plan, Design 1, does not stitch the interconnections together. The existing HVDC ties between the Eastern and Western Interconnections are replaced at their current capacity. However, a bunch of new AC lines are added on either side.

The three other scenarios are:

There’s a great deal of discussion in the study of assumptions and modeling methodology, along with a great many caveats. My favorite is, “results are known to be imperfect, yet informative.” (We should all accomplish as much!)

I will spare you most of those details. The one thing to know is that all four scenarios were run under two separate policy environments, one consisting of current policy, one with a rising carbon tax that reaches $40 a ton by 2038.

All the scenarios, under both policy environments, meet demand and reliability requirements. They all make energy trading more efficient and smooth out fluctuations in supply and demand. They all reduce the cost of electricity, enough to more than pay for their costs. All designs were deemed “very attractive” by the research team.

In other words, almost any step in the direction of a national grid pays for itself.

One striking result: The cost savings from a national grid rise substantially under a carbon price.

But under carbon policy, the same $1 yields $2.48, $3.30, and $2.52 respectively. The benefits of stitching the country’s grids together rise along with the price on carbon.

And it should be noted that these are conservative estimates, calculating the “net present value” of benefits for only 15 years. As the researchers note, however, investment in a national grid will pay dividends for much longer than that. These are investments in infrastructure meant to last 50 years, 80 years, or even longer.

If we calculated the ratio of costs to total benefits — benefits over the full lifespan of these transmission assets — then the investment would look so doggone obvious it would seem criminal not to do it.

But we have difficulty looking that far ahead. We’re not very good ancestors.

Maybe the US will have national carbon policy in the next 15 years or maybe it won’t, but it will have something in the next 50. And whether it ever has any or not, a national grid is a no-brainer.

There are other benefits to a national grid that NREL did not attempt to capture in the Seams research. A national grid could make electricity markets broader and more competitive. It could bring resilience and reliability benefits that are difficult to quantify in advance. And it could spur economic development and jobs.

Many previous studies of grid interconnection and expansion, some of which cover those other benefits, also find a large net present value in grid investments, and many organizations have endorsed the idea:

But if NREL doesn’t capture the full benefits of a national grid, it also doesn’t begin to capture the difficulties and roadblocks, which are social and political rather than technological — and make the technological challenges look easy. One of the caveats in the study made me chuckle: “All cases imagine a future where it is feasible to build multi-region transmission.”

It is quite difficult to build multiregion transmission. Allocating costs is devilishly difficult and done differently in different states and regions. Zones of transmission planning are balkanized and inefficiently small. Local and state interests opposed to transmission lines are often more motivated to organize than supporters are.

A national grid is, in many ways, a perfect representative of humanity’s difficulties in the age of climate change. We know perfectly well, over the long term, in the big picture, that we need one. It makes economic and environmental sense. But we have enormous trouble organizing around long-term, big-picture goals, at least in a way that overcomes the many jurisdictional complications and parochial interests that impede them.

It’s difficult to think over the horizon, to organize for the future — to be good ancestors. Doing so means pushing against elements of human nature, the greed of wealthy incumbents, and the sheer inertia of anachronistic mechanisms of governance.

But it’s difficult to see how the barriers to a national grid are going to be overcome without a bottom-up, organized political push. Modeling and analysis, however impressively done, will never be enough.

“There should be zero discrimination”: Joe Biden spoke in defense of transgender rights at Thursday’...
Is the coronavirus airborne? It’s complicated.
What the next GDP figure will — and won’t — mean
A disturbing new study suggests Sean Hannity helped spread the coronavirus
Housing segregation left Black Americans more vulnerable to Covid-19
Sondland says he told Pence about Trump and Ukraine. Pence says that “never happened.”