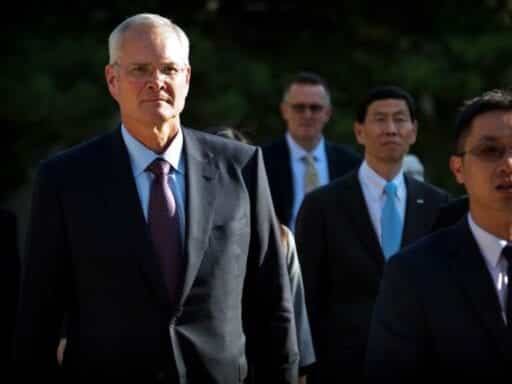 Some candidates say they will hold polluters criminally accountable for their harm to the environment.

To find out how 2020 Democratic candidates would use their presidential powers to address climate change, we sent six key questions to every campaign. This post includes nine candidates’ answers to the fifth question. You can find answers to the other five questions on the landing page.

Right now there’s a nationwide push to hold fossil fuel companies accountable via lawsuits, shareholder resolutions, and divestment for their contributions to climate change and campaigns to mislead the public. Do you support these efforts? What do you see at the government’s role in holding polluters accountable?

Joe Biden: [I] will take action against fossil fuel companies and other polluters who put profit over people and knowingly harm our environment and poison our communities’ air, land, and water, or conceal information regarding potential environmental and health risks.

As president, [I] will hold polluters accountable. Plain and simple. Under the Trump Administration, the EPA has referred the fewest number of criminal anti-pollution cases to the Justice Department in 30 years. Allowing corporations to continue to pollute — affecting the health and safety of both their workers and surrounding communities — without consequences perpetuates an egregious abuse of power. [I] will direct [my] EPA and Justice Department to pursue these cases to the fullest extent permitted by law and, when needed, seek additional legislation as needed to hold corporate executives personally accountable — including jail time where merited.

Elizabeth Warren: Yes, I do. I have introduced legislation to hold top corporate executives criminally accountable if, as a result of their negligence, companies pollute the air or cause harm to our environment.

Bernie Sanders: Yes. [My] Green New Deal includes a comprehensive plan to hold fossil fuel executive accountable and end their greed once and for all. For decades, fossil fuel corporations knowingly destroyed our planet for short-term profits. The fossil fuel industry has known since as early as the 1970s that their products were contributing to climate change and that climate change is real, dangerous, and preventable. Yet, they kept going. Instead of working to find solutions to the coming crisis, the fossil fuel industry poured billions into funding climate denialism, hiring lobbyists to fight even the slightest government regulation and oversight, and contributing to politicians who would put the interests of fossil fuel executives over the safety and security of the planet. Fossil fuel corporations have fought to escape liability for the pollution and destruction caused by their greed. They have evaded taxes, desecrated tribal lands, exploited workers and poisoned communities. [I] believe this is criminal activity, and, when [I am] president, [I] will hold the fossil fuel industry accountable.

Transitioning to 100 percent renewable energy cannot be done without standing up to fossil fuel corporations. As president, [I] will prosecute and sue the fossil fuel industry for the damage it has caused. When it was revealed in 2015 that the fossil fuel industry knew their actions were contributing to climate change decades ago, [I] sent a letter to then-Attorney General Loretta Lynch asking her to open a federal investigation to find out whether the industry violated the law.

[I] will ensure that his Department of Justice and Securities and Exchange Commission investigate these companies and bring suits — both criminal and civil — for any wrongdoing, just as the federal government did with the tobacco industry in the 1980s. These corporations and their executives should not get away with hiding the truth from the American people. They should also pay damages for the destruction they have knowingly caused. We will also support state and regional action to determine the projected harm to communities and pave the way for actions that remunerate devastated communities requiring care and repair and the dollars to do it.

[I] will make the fossil fuel industry pay for their pollution by massively raising taxes on corporate polluters’ and investors’ fossil fuel income and wealth. We will raise penalties on pollution from fossil fuel energy generation. The EPA has historically under-enforced the existing penalties for polluting under the Clean Air Act. As president, [I] will raise and aggressively enforce those penalties.

[I] will require remaining fossil fuel infrastructure owners to buy federal fossil fuel risk bonds to pay for disaster impacts at the local level. Federal risk bonds can then be paid to counties and municipalities when there are fossil fuel spills, explosions, or accidents.

[I] will divest federal pensions from fossil fuels and use the Federal Reserve and other financial regulatory bodies to force and pressure and financial institutions, universities, insurance corporations, and large institutional investors still invested in or insuring fossil fuels to transition those investments to clean energy bonds.

Kamala Harris: To succeed, this must be a whole society effort where we hold ourselves and one another accountable to act to meet the existential threat posed by this climate crisis. For my part, a Harris Administration will use the full extent of its authorities to hold polluters accountable. I know how to get this done, having taken on big oil companies throughout my career — from defending California’s climate laws in court to suing corporations like Chevron for damaging the environment.

Pete Buttigieg: Climate change and climate security is the defining challenge of our generation. We should push for change through every available avenue. Corporate social responsibility means little if a company’s business practices are harming people, and we must have robust enforcement and serious accountability for wrongdoing.

Beto O’Rourke: [I] understand that accountability is essential to moving forward on climate change. An O’Rourke administration would enforce our laws to hold polluters accountable — including for their historical actions or crimes — and would require public companies to measure and disclose climate risks and the greenhouse gas emissions in their operations and supply chains.

Tom Steyer: I strongly support the efforts to hold fossil fuel companies accountable for their corrupt actions to mislead and endanger the public — in fact, I’ve been directly involved in the divestment effort. I spent my years on Stanford University’s board successfully convincing them to dump coal holdings and pushing hard for full divestment from fossil fuels. It is time that we break the grip that these corporations have over our political system and strengthen laws that protect workers and the environment. In the past, once fossil fuel companies have gotten all the money they can out of a community or a piece of land they try to pull up stakes and move on without repairing the damage they’ve done in the process. This needs to stop. We need to step up enforcement and prosecute corrupt companies that poison our air and water. It is time that we tell these executives that they will not prevent us from taking action on the climate crisis, and create real — potentially criminal — consequences for actions they may have taken to knowingly spread false information and slow climate action. I will enact structural change that ends government giveaways to big corporate polluters, manages public resources for all Americans, and invests in a regenerative economy with good, clean jobs in fossil fuel communities.

Amy Klobuchar: [I] support efforts to hold companies accountable for their contributions to climate change and campaigns to mislead the public. [I have] signed the No Fossil Fuel Money Pledge and believe we also need aggressive campaign finance reform that takes on the political influence of special interests like the fossil fuel industry.

Michael Bennet: We should never elect another climate denier to the White House. We must hold polluters accountable for their actions.

Megyn Kelly wanted to be the next Oprah. Her split with NBC shows why that may never happen.
Summer Olympics postponed, India on lockdown: Tuesday’s coronavirus news
How hackers, probably Russian, infiltrated the federal government
Bill Gates on Elizabeth Warren, Jeffrey Epstein, and why he’d pay more — but not too much more — in ...
“King-Lee Day” and other ways states bend MLK’s legacy
This is worse than the crucifixion of Christ, and other GOP impeachment defenses