What we learned from Trump’s worst foreign policy week ever 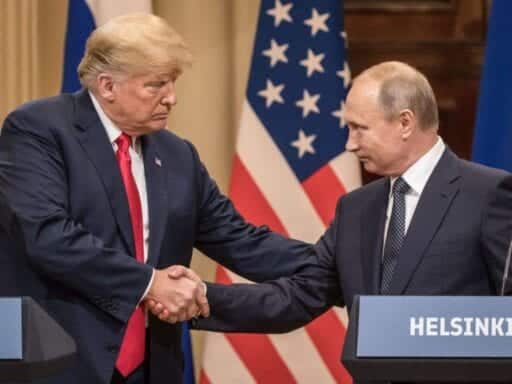 President Donald Trump just survived one of the most disastrous weeks of his presidency.

In the process, however, he demonstrated just how poorly he handles foreign policy issues — and undermined our persistent, misplaced hope that he will somehow do better.

Instead of defending US interests at his press conference with Russian President Vladimir Putin on July 16, Trump kowtowed to the dictator. He bought Putin’s denials that Russia didn’t interfere in the 2016 presidential election, even though Trump’s top intelligence officials have repeatedly stated that Russia did — and provided evidence of this fact weeks before Trump was inaugurated.

The US president also failed in other ways. He didn’t shame Putin for working with Iran to prop up Syrian President Bashar al-Assad and relentlessly bombing innocent civilians. He also didn’t push back on Putin’s attempt to take over Georgia in 2008, or his invasion of Ukraine and annexation of Crimea in 2014.

Trump’s performance was so bad, in fact, that the administration received widespread, bipartisan condemnation for it, and even official congressional action in the form of a non-binding resolution to rebuke it.

The president doesn’t seem to be bothered by any of this. He just invited Putin to the White House for another meeting in the fall. What’s really surprising about this past week is how caught off guard the American people were by what transpired.

Here are the five main takeaways, in case you missed the action.

Trump often insists on going rogue, no matter the situation

Trump’s staff gave him around 100 pages of briefing materials before his Putin meeting, telling him exactly what he should and shouldn’t say. He ignored almost all of it, and the entire meeting went “very much counter to plan,” a source told the Washington Post on July 16.

But Trump made it worse. Roughly 24 hours after Trump sided with Putin over US intelligence officials on the question of whether Russia interfered in the 2016 election, his staff convinced Trump to reverse course. Reading from a prepared statement, Trump said that he accepted the intelligence community’s conclusion that Moscow meddled.

Then came his next sentence: “Could be other people also, a lot of people out there.”

.@POTUS: “I accept our intelligence community’s conclusion that Russia’s meddling in the 2016 election took place. Could be other people also…There was no collusion at all.” https://t.co/gfbd21PPp2 pic.twitter.com/3Ht30p80nx

You could almost hear the sounds of his staff’s palms hitting their foreheads.

Even when Trump tried to do damage control, he couldn’t. And there’s one simple reason for that: Trump can’t control himself.

The president’s staff surely knows this and tries their best to work around it. But the implications for America’s foreign policy are staggering: No matter what Trump’s team says or does, Trump will act the way he wants to.

That means, perhaps more than any other president, Trump will conduct US foreign policy as his own vanity project — and not solely in the interest of the people he serves.

There does seem to be a method to Trump’s global madness: He likes to lambast allies but flatter and cajole America’s adversaries.

And all of that took place at the opening breakfast of the two-day summit.

Things just went downhill from there. Trump arrived 30 minutes late to a meeting on Russian aggression, skipped at least two scheduled meetings with world leaders, and threatened to “go it alone” if European allies didn’t pay more for their own defense, seeming to suggest he might pull the US out of the alliance.

Trump ultimately declared the summit a success in a bizarre impromptu press conference shortly after, claiming he got allies to pay up for defense and declaring himself “a very stable genius.” (French President Emmanuel Macron disputes that NATO countries agreed to Trump’s demands.)

Compare all of that to Trump’s Monday with Putin. A two-hour, one-on-one meeting with no staff around. A long, bilateral working lunch with staff to discuss further details of the US-Russia relationship. Then, a 45-minute press conference where the president proceeded to praise Putin and Russia. It was vaguely reminiscent of Trump’s time with North Korea’s Kim Jong Un a month earlier.

There’s one potential reason why the president acts this way: Trump believes America’s friends should do more to promote US interests, while the president feels he must be nice to adversaries to get them on Washington’s side.

Whatever the reason may be, Trump has completely flipped decades of American foreign policy on its head — and this past week was the greatest example of it yet.

Republicans have a bending — but not breaking — point

The backlash was swift after Trump’s disastrous press conference with Putin on Monday — and much of it came from the president’s own party.

Even reliable White House allies, like House Speaker Paul Ryan, issued statements slamming Trump’s refusal to admit that Moscow interfered in the 2016 election. “There is no question that Russia interfered in our election and continues attempts to undermine democracy here and around the world,” Ryan said in a statement hours after the press conference. “The president must appreciate that Russia is not our ally.”

Republicans stood up to Trump again on Wednesday. The White House didn’t rule out letting Russians interrogate 11 Americans — including a former US ambassador to Moscow — for alleged crimes for which there is no evidence.

The next day, the GOP-led Senate passed a resolution with a unanimous 98-0 vote, discouraging the US from handing over current or former US officials to the Kremlin.

But the resolution was nonbinding, meaning Congress has no way of actually implementing it, and there are no consequences if it does happen.

What’s worse, the GOP rejected two other nonbinding proposals before voting on the one they passed. The first one expressed the Senate’s support for the US intelligence community and Mueller’s probe, and the other also backed US spies and called for hearings about the Trump-Putin meeting to learn about what they said to each other.

So, when faced with three resolutions, all of which were symbolic, Republicans only backed the weakest of them. It shows the GOP will bend when it comes to Trump’s handling of Russia, but not even Trump’s performance in Helsinki could get Republicans to break with him.

Director of National Intelligence Daniel Coats likely knows the names of Chinese spies posing as students at American universities, which US grids Iranian hackers gained access to, and even what you just texted your cousin.

What he doesn’t know is what Trump said to Putin during their meeting. That’s right: The person charged with knowing many of the world’s secrets doesn’t know what his boss said in a high-stakes meeting.

That was just one of many shocking, and uncharacteristically candid, revelations Coats offered a crowd at the Aspen Security Forum on Thursday.

It gets worse. Coats also said he had no idea Trump planned to meet with Russian Foreign Minister Sergei Lavrov and then-Ambassador Sergey Kislyak at the White House in May 2017 — and he also had no clue that Trump had invited Putin to a second meeting in Washington.

When NBC’s Andrea Mitchell broke that news to Coats during their interview, he was clearly caught off guard. “Say that again?” Coats said, nervously laughing as the audience joined him. “Okay. That’s going to be special.”

The White House, naturally, is unhappy. “Coats appeared to be laughing at the president, playing to his audience of the intellectual elite in a manner that was sure to infuriate Trump,” an administration official told the Washington Post.

What this petty squabble shows is two amazing breakdowns in the way this White House runs. First, the president’s top officials don’t know what Trump may or may not have agreed to with Putin. And second, at least one top Trump official doesn’t seem to care who knows about it.

This is not normal. But then again, we shouldn’t be surprised.

The surprising thing about Trump’s Helsinki meeting? That we were all surprised.

Here’s a question I wrestle with: Trump is not a normal president, so why do we keep expecting him to act normally?

I asked myself this again during the reaction to Trump’s press conference with Putin. The political community was shocked — SHOCKED! — that he would side with Putin over American intelligence officials, brag about his election win, and repudiate special counsel Robert Mueller’s probe in front of the entire world instead of, well, acting presidential and defending US interests.

But why did we expect anything else? Trump has frequently upended our expectations about how an American president should act while abroad — just like he has upended many other norms of the presidency.

And it’s not just with Putin. Trump has also:

I could go on, but you get the idea. The Putin meeting was arguably worse than any of the above examples, but the point remains the same: Trump is a disaster when he represents America around the world. That he was a disaster again in Helsinki should have come as no surprise to anyone.

Italy puts 16 million people under quarantine to curb the spread of coronavirus
Most American homes are still heated with fossil fuels. It’s time to electrify.
What the anti-stay-at-home protests are really about
Romance novelists speak out on the harassment they face online
Trump keeps telling people to vote twice, even though that’s a crime
Cartier lost a trademark battle over the word “love”