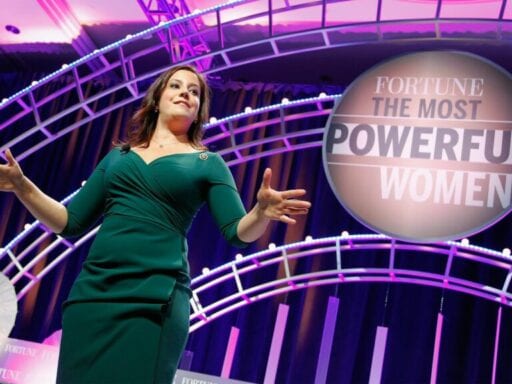 Republicans say they want to elect more women. Their messaging works against that.

A record-breaking number of women are running for office in hopes of changing a strikingly male-dominated political landscape in 2018. But the so-called “year of the woman” comes with an important caveat.

“I see the stories about the year of the woman and I always feel there should be an asterisk,” Melissa Deckman, a political scientist who closely follows women in politics, said. “It’s the year of the Democratic woman.”

For Republican women, 2018 isn’t shaping up to be historic at all.

In recent months, several reports in the New York Times, the Washington Post, and FiveThirtyEight have detailed a difficult roadmap ahead for Republican women running for House seats — particularly for incumbents.

There are lots of reasons to believe that there will be more women in Congress overall after the 2018 midterms — Rutgers University’s Center of American Women and Politics has tallied 155 women who have already won their primaries, and 307 women are still in the running. But those numbers are heavily skewed toward Democrats. Just 35 Republican women have won their primaries, and there are just 79 Republican women still in the running. One woman Republican incumbent — Alabama’s Rep. Martha Roby — was forced into a run-off election, which she won in mid-July.

Republican women are already a clear minority in Congress. Of the only 84 women in the House of Representatives (out of 435), just 23 are Republicans. Nearly a fourth of sitting Republican women are retiring or leaving the House to seek higher office. That includes retiring Florida’s Rep. Ileana Ros-Lehtinen, who currently represents a Democratic-leaning district, as well as Rep. Martha McSally (R-AZ) who is in a heated Republican primary for Arizona Senate. As Sheryl Gay Stolberg detailed in the New York Times, the 2018 midterm elections may actually widen the gap between Democratic women and Republican women in the House.

House Republican women have a difficult electoral map ahead

Still months from Election Day, the roadmap for Republican women in the House already looks fraught. There are a handful of vulnerable blue-state Republican women that Democrats are targeting this year.

California’s Rep. Mimi Walters will be facing off against UC Irvine law professor Katie Porter, a progressive who has endorsed Medicare-for-all and has the support of Sens. Elizabeth Warren (MA) and Kamala Harris (CA). In Virginia, Democrat Jennifer Wexton wants to pick off Rep. Barbara Comstock, who is one of the handful of Republicans representing a district Hillary Clinton won in 2016. And in New York, Republican Rep. Claudia Tenney, who has been known for embracing President Donald Trump, is in a toss-up district.

Other Republican women are far from a guaranteed loss — but they all represent districts that could be swept up in a blue wave. A June poll found Utah’s Rep. Mia Love in a tight race with her Democratic challenger, the Salt Lake County Mayor Ben McAdams. Rep. Cathy McMorris Rodgers (R-WA), the only Republican woman in House leadership, is also facing a tough reelection this year as her Democratic opponent, state Senate Majority Leader Lisa Brown, has been working to tie McMorris-Rodgers to Trump.

There is also a handful of Republican women who are retiring — like Rep. Lynn Jenkins (KS) and Rep. Ros-Lehtinen (FL) — and others who are seeking higher office.

Noem has already won her primary, and is expected to be South Dakota’s first woman governor. Blackburn is also expected to win her Senate primary in Tennessee this Thursday. Meanwhile, Black, who was a high-ranking committee chair in Congress last year, is in a heated four-way Republican primary for governor.

But still, it’s highly possible that in 2019 the House will have fewer Republican women than in 2018.

It’s not as though Republicans aren’t aware of the gender disparity in their ranks, especially as compared to their Democratic colleagues. Only two House Committees — the Education and Workforce Committee and the Ethics Committee — are chaired by Republican women. McMorris Rodgers, who is the chair of the House Republican Conference, is the only woman in leadership.

Rep. Elise Stefanik (R-NY), the youngest woman to be elected to Congress, is in charge of candidate recruitment for 2018, a position she told her local newspaper that she pitched herself.

And there’s a new group aimed at helping conservative women get elected: Winning for Women. The idea was to compete with the Democratic organizations like Emily’s List, a powerhouse PAC that works to elect pro-abortion rights women to office. Winning for Women is aimed at electing right-of-center women who support “free-market principles and a strong national defense.”

But the new infrastructure just doesn’t compare to what’s happening on the other side of the aisle. Winning for Women has fundraised just shy of $300,000, according to the latest Federal Election Commission filings which accounts through the end of June. Maggie’s List, another group dedicated to electing Republican women, raised just over $100,000. By comparison, Emily’s List has upward of $30 million and endorsed 57 candidates for the House alone.

Political scientists following these trends are quick to point out that this conversation bubbles up every so often for Republicans. Famously, during the Republican autopsy of Mitt Romney’s presidential loss in 2012, the conversation on the right focused a lot on energizing women and minorities in the party.

“But then you saw very little after that,” Kelly Dittmar, a political scientist with Rutgers University said. “We didn’t see that translate into concrete initiatives.”

“They will have a press release about it. They don’t put resources toward this,” Deckman said.

Women are much less likely than men to consider running for office on their own. They are more likely to run for office if they have been encouraged to do so, and when they are recruited, they win at the same rate as men do.

This means two things: Getting more women in office requires infrastructure, like candidate training, on-the-ground recruitment and fundraising, and political parties have to believe prioritizing women candidates because they are women is important.

But for a Republican party that decries “identity politics” — political positions based on race, or gender or sexual orientation — as a polarizing force distracting Americans from the bread and butter issues like taxes and health care, it’s difficult to establish the resources for women.

“With identity politics being played all around and 21st-century technology accelerating it, and putting gas on the fire — that is my big concern of politics these days. And that makes it harder to have political goodwill in this country because of all this polarization,” House Speaker Paul Ryan told Politico in an interview after announcing his retirement. “If you can deny the oxygen of identity politics, the best way to do that is to have a faster-growing economy, more upward mobility, higher wages, getting people from poverty into the workforce.”

This view trickles down. It makes it hard to convince possible candidates that they should run because their gender brings a worthy and necessary experience to the table. It means sitting Republican women often don’t talk about how being a woman is part of what makes them qualified for office, unless they are put in front of what the party considers to be “women’s issues” — like anti-abortion rights.

And it means Republican political donors — the vast majority of which are still men — may not prioritize giving to groups dedicated to promoting women candidates. Part of Emily’s List’s power on the left, after all, is that it has the money to make the Democratic Party listen.

“Your demographics do inform your qualifications,” Dittmar said. “Your lived experience as a woman or a person of color yields very different qualifications.”

Geothermal energy is poised for a big breakout

Montana’s Senate race was supposed to be easy for Republicans. It’s a dead heat.