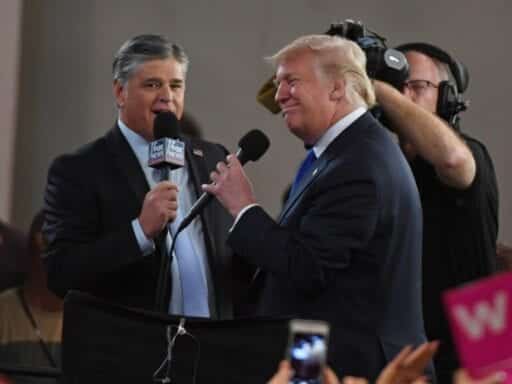 As it has been since Donald Trump started consolidating the Republican nomination for president in early 2016, Fox News and Fox Business remain almost entirely loyal to Trump. But in recent days the president has expressed frustration that the cable network isn’t entirely loyal to him — with no exceptions whatsoever.

The latest example of Trump’s growing frustration with Fox News came on Saturday, when Trump tried to draw a connection between the ratings of shows on the network and their loyalty to him.

“Has anyone noticed that the top shows on @foxnews and cable ratings are those that are Fair (or great) to your favorite President, me!” Trump tweeted. “Congratulations to @seanhannity for being the number one show on Cable Television!”

That tweet came three days after Trump unloaded on his once-beloved cable network in a string of tweets, writing in one, “The New @FoxNews is letting millions of GREAT people down! We have to start looking for a new News Outlet. Fox isn’t working for us anymore!”

….I don’t want to Win for myself, I only want to Win for the people. The New @FoxNews is letting millions of GREAT people down! We have to start looking for a new News Outlet. Fox isn’t working for us anymore!

But in an illustration of how much Trump still needs Fox News, between the time he posted his tweet about Fox News on Saturday and the end of the long Labor Day weekend, Trump posted no less than 14 tweets or retweets promoting Fox News and Fox Business programming either by quoting pro-Trump commentary from the network or featuring videos clips.

It’s well known that Trump has something of a symbiotic relationship with Fox News, particularly his beloved morning show, Fox & Friends, and Fox News’s prime-time hosts. It sometimes seems the president and his favorite Fox News personalities are in an exclusive conversation with one another for the whole nation to see, with Trump often live-tweeting or responding to coverage. Recently, though, Trump has distanced himself from parts of the network that can’t be counted on to cover him in a fawning fashion.

Fox News seemed to bristle at the criticism. Even anchor Brit Hume, who is usually one of the president’s biggest cheerleaders, seemed to think Trump’s August 28 tweet crossed a line.

“Fox News isn’t supposed to work for you,” Hume tweeted in response to the president. (The point Hume tried to make is debatable — Fox News hosts Sean Hannity and Jeanine Pirro spoke at a Trump rally just before the 2016 election.)

Then, last Thursday, host Neil Cavuto closed his show with a monologue in which he directly addresses the president and said, “Mr. President, we don’t work for you. I don’t work for you. … My job is to cover you, not fawn over you or rip you. Just report on you.”

“Mr. President, we don’t work for you. I don’t work for you,” Fox News host Neil Cavuto said in the closing monologue of his show. “My job is to cover you, not fawn over you or rip you. Just report on you.” pic.twitter.com/owHC2gwd0u

Trump has also recently started live-tweeting another, even more Trump-friendly news outlet — One America News Network (OANN), a relatively obscure cable news network started explicitly in response to “bias” against Trump. The network frequently features members of his own family, like his daughter-in-law Lara Trump. Trump has promoted the relatively obscure network on a number of occasions this year as his apparent frustrations with Fox News have built up.

There are a few reasons that Trump seems to be suddenly souring on Fox News. It’s no accident that this criticism is coming as Trump is ramping up his reelection bid and as polling — including one recently conducted by Fox News — indicates he faces an uphill battle toward winning a second term. Trump’s motivations for suddenly turning on Fox illuminate just how little tolerance he has for criticism as well as how much loyalty he expects — including from America’s top-rated cable news network.

Trump’s frustration with Fox News has been percolating for a while. But his recent torrent of criticism came in response to a poll.

On August 15, Fox News released a survey that showed Trump polling below 40 percent in head-to-head matchups against four front-runners for the 2020 Democratic presidential nomination. This is, by the way, consistent with other polling, which tends to show former Vice President Joe Biden and Sen. Bernie Sanders performing strongly against the president and other candidates just a short step behind. It might not be a good look for Trump, especially coming from a network he relentlessly promotes, but it is what current polling has been consistently showing. And Fox News polls adhere to pretty much the same standards as other reputable polling outlets.

Trump reacted by lashing out at Fox News and touting another, less reputable poll that inflates his popularity by about 10 points. He seemed to imply that Fox News should, if not rig polls in his favor then at the very least, suppress ones that look bad for him.

“I don’t believe it. I don’t believe it. Every place I go we have lines outside,” Trump told reporters on August 18, before turning his fire on Fox News. “Fox has changed. And my worst polls have always been from Fox. There’s something going on at Fox, I’ll tell you right now. And I’m not happy with it.”

But, in reality, not much has changed at Fox — both Fox News and Fox Business are conservative networks that cover the news in an almost entirely pro-Trump manner, with very few exceptions.

Smith’s weekday show serves as an island of Trump criticism amid Fox News’s MAGA sea. He regularly debunks conspiracy theories pushed by the president and other Fox News hosts, criticizes Trump’s attacks on the press, and has even indirectly criticized his colleagues for spreading pro-Trump misinformation.

Trump unloaded on Smith, comparing him unfavorably with the aforementioned OANN and, in the ultimate Trumpian insult, said that even hated CNN is better than his show. (Smith actually responded to Trump’s tweet live on air.)

Watching Fake News CNN is better than watching Shepard Smith, the lowest rated show on @FoxNews. Actually, whenever possible, I turn to @OANN!

Smith hasn’t been the only target of Trump’s ire. Though Fox News is a conservative outlet, it has always invited commentary from token liberals or Democrats. In addition to Smith, registered Democrat Juan Williams is one of the hosts of The Five, former Democratic National Committee chair Donna Brazile is a contributor, and the network occasionally interviews Democratic officials like Democratic National Committee communications director Xochitl Hinojosa.

The presence of these voices on Fox News is far outweighed by Republicans and Trump supporters. But Trump has increasingly taken umbrage at the fact that Fox News doesn’t feature even more MAGA voices, and in recent days, he’s posted tweets blasting Smith, Williams, and Brazile.

Juan Williams at @FoxNews is so pathetic, and yet when he met me in the Fox Building lobby, he couldn’t have been nicer as he asked me to take a picture of him and me for his family. Yet he is always nasty and wrong!

Hinojosa appeared on the network recently to talk about the race for the Democratic presidential nomination and the interview barely even touched on Trump. Still, Trump expressed frustration that they interviewed her without pushing back with Trump administration talking points.

….are all in for the Open Border Socialists (or beyond). Fox hires “give Hillary the questions” @donnabrazile, Juan Williams and low ratings Shep Smith. HOPELESS & CLUELESS! They should go all the way LEFT and I will still find a way to Win – That’s what I do, Win. Too Bad!….

But overall, Fox News talks about Trump the same way it always has. Fox & Friends is still going to extreme lengths to defend Trump’s push to hold next year’s G7 at a resort he still owns and profits from, and Fox News’s prime-time lineup still features very pro-Trump voices.

Last week, over on Fox Business, host Stuart Varney went to painful lengths to make a case that the president — who the Washington Post says has made more than 10,000 false or misleading claims since taking office — has, in fact, never told a lie to the American people.

This exchange between Stuart Varney and Joe Walsh is oddly reminiscent of the torture scenes from “1984.”

Walsh names one. Varney denies it.

Walsh: “Do you believe he’s ever told the American people a lie?”

Trump is undoubtedly looking ahead to November 2020, and wants to put himself in the best possible light in front of the most watched network among his base. He seems to be mad that the network lets critics of his administration get any airtime at all.

With the notable exception of the first Republican presidential debate in August 2015 — the one where then-Fox News host Megyn Kelly grilled Trump about his history of misogyny, with Trump infamously firing back by saying “you could see there was blood coming out of her eyes, blood coming out of her … wherever” — Fox News has been very good to Trump, and vice versa. The network has been the most watched cable network for each month going back more than three years — a timeframe that coincides with what Ted Cruz recently described as late Fox News founder and CEO Roger Ailes’s decision to go “all in for Trump.”

Trump and Fox News have enjoyed a symbiotic relationship. The network has become something of a mouthpiece for the administration. (This has prompted some soul-searching among Democrats about Fox News, with many Democratic candidates refusing to appear on the network, but others arguing that boycotting the network is a missed opportunity to potentially reach some persuadable voters.)

While Trump’s attacks have yet to have any discernible impact on Fox News’s programming, he risks messing up a good thing. For one, Fox News viewers represent a significant portion of Trump’s base. Last Thursday, Aaron Blake of the Washington Post summarized new polling from USA Today and Suffolk University illustrating just how significant the overlap is:

— Among those who “strongly approve” of Trump, 60 percent trust Fox News more than any other TV news outlet. Fox also accounts for 36 percent of those who simply “approve” of him.

— In a 2020 matchup with a generic Democrat and a third-party candidate, Trump earns 54 percent of his support from those who trust Fox the most.

— Of the 41 percent of people who have a favorable opinion of Trump, more than half of them say Fox is their most trusted news source (52 percent).

— Among the remaining people who say they like Trump, most didn’t have a favorite news outlet. Just 16 percent of Trump supporters named some other outlet tested — whether CNN, MSNBC, ABC, NBC, CBS, C-SPAN, Comedy Central, or PBS/NPR. In other words, among people who seem to rely on TV news for their information enough to have a favorite, Fox-first viewers account for 4 out of every 5 Trump supporters.

Trump is now telling these people — supporters of his who watch Fox News — to turn the channel.

It’s a risky strategy, but it’s also one that’s very Trump. Doubling down on petty grievances potentially at risk of his own gain not only says something about his broader temperament but also about the extent to which he expects Fox News to serve as an unofficial arm of his reelection campaign.

Top officials are warning of Russian hacking. Trump hasn’t joined them.
New York City secures its own supply of 100,000 coronavirus tests per week
The very expensive, extremely close Florida Senate race, explained
Spotify may buy The Ringer. Here’s why that makes sense.
The strong case for building more stuff
How robots are transforming Amazon warehouse jobs — for better and worse